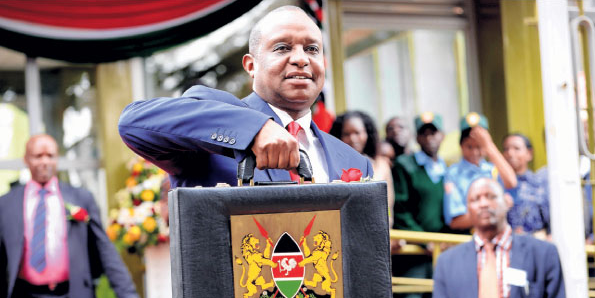 NAIROBI (HAN) June 8.2016. Public Diplomacy & Regional Security News. The following are highlights of the Kenyan government’s budget for the 2016/17 fiscal year as presented to parliament by Finance Minister Henry Rotich.

“Our target to generate 1 million new jobs remains. In 2016, we target to grow by 6 percent and by 7 percent in the medium term. This level of growth will continue in generating new jobs and creating new opportunities for our young men and women graduating from various institutions.”

The minister said the government was making efforts to introduce tax on the informal sector and tackle tax evasion.

“If everybody paid their fair share of taxes we would be in a better position to lower tax rates. As part of the review of income tax, we are considering to introduce presumptive tax for the hard to tax segment of our people, including those in the informal sector.”

The minister said 2016/17 financing gap would be 691.5 billion shillings. “But excluding the standard gauge rail (SGR), which is fully funded by China, the deficit is 603.2 billion shillings. The overall gap will be financed by net domestic borrowing of 225.3 billion of 3 percent of GDP.” Some other funding would come from external concessional borrowing.

“Going forward, we remain committed to bringing the fiscal deficit down gradually to below 4 percent of GDP in the medium term.”

He said net present value of public debt to GDP stood at below 50 percent and the country faced a “low risk of debt distress” based on joint assessments by the government, World Bank and International Monetary Fund.