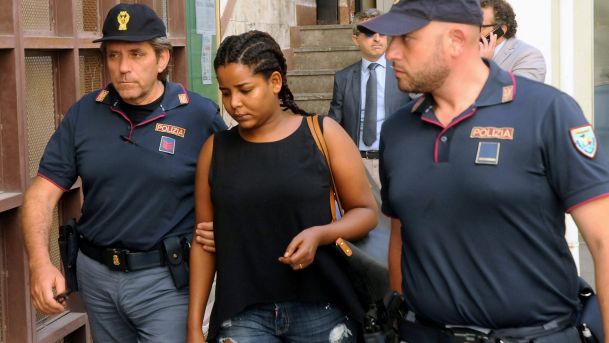 Police seized 526,000 euros (nearly $600,000) and $25,000 in cash that was found in the store. More useful to investigations was the discovery in the shop of what was described as a “master book, filled with names and phone numbers of foreigners.”

“It was the place where the money of migrants who wanted to reach Italy was collected,” Palermo Prosecutor Francesco Lo Voi said, adding that the ring

had two hubs — one in the Sicilian city and the other in Rome.

Hundreds of thousands of asylum seekers and economic migrants have reached Italy in the last few years, after rescue at sea when smugglers’ boats founder in the Mediterranean. The boats set sail from Libya, where a main base of the traffickers is located, and migrants wait in sordid conditions, often for months, for the opportunity to be crowded into the boats after paying thousands of dollars.

Palermo-based authorities said that the suspects were 25 Eritreans, 12 Ethiopians and one Italian. Investigators alleged that the ring also helped arrange “convenience marriages.” The ring also used the same channel to smuggle in drugs, specifically chat from Ethiopia, police said.

Important stories from around the world.

Palermo police said in a statement that an Eritrean man who was arrested in 2014 collaborated with authorities, providing for the first time “a complete reconstruction of criminal activities” of migrant trafficking involving operations both in North Africa and Italy.

Lo Voi told a news conference in Palermo that the probe helped investigators to “reach a higher level in the fight against clandestine immigration.” The investigation also “’pinpointed the financial channel of the criminal network that managed the trafficking of migrants from Africa to Sicily,” he said.

Lo Voi said another scheme involved migrants, legally in Italy, falsely stating that they had relatives who wanted to reach them in Italy. Under Italian law, immediate family members or spouses can be given permission to enter Italy.

Palermo police investigations in the past few years have led to the prosecution and arrest of suspects involved in whisking away migrants shortly after rescue boats bring them to Sicily, so they can reach family members in Germany or other northern European countries.