Home frontpage Is Uganda Likely to see its First Ever Run-Off? 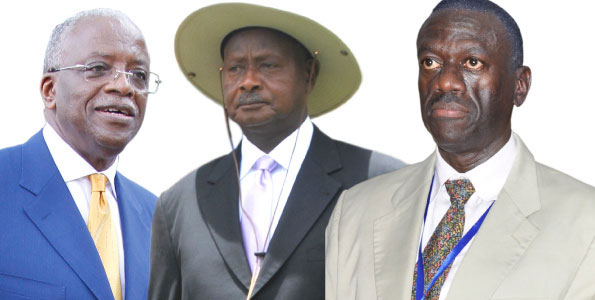 Although Mr Mbabazi is as much a novice in a presidential contest as four other candidates who were duly nominated for the same race, the former premier is perceived to be as strong as President Museveni and Dr Besigye. This he owes to his long service in the ruling NRM party, where he is believed to have been the brains behind all its electoral victories.

He has also held high profile positions in the now three-decade long regime, and is believed to know the ins and outs of organising and running a government. Until last December, he was the de facto deputy leader in both the party and the government.

As the newest entrant of his stature in the race, he has touched off a certain optimism that is reminiscent of the 2001 and 2006 polls when Mr Besigye contested for the presidency.

“We expect that money is going to have a very broad influence on these elections because increasingly, voters are looking to every candidate to grease their palms and soothe their throats,” said Henry Muguzi, the national co-ordinator of the Alliance for Election Campaign Finance Monitoring.

The forecast appears based on the highly monetised but chaotic internal elections in the ruling NRM party that were concluded last month; the re-emergence of state-sponsored paramilitary groups, like that of Maj (Rtd) Kakooza Mutale, a special presidential adviser on political affairs; the nationwide controversial training of millions of young men and women as crime preventers by the police; and the campaign strategies of Mr Mbabazi and Dr Besigye.

Reputed to have a large war chest, sources within Mbabazi’s camp say he plans to deploy his resources in a door-to-door campaign focused on rural areas, which tend to be Museveni’s strongholds and which the existing opposition has struggled to penetrate.

This strategy coupled with Besigye’s vow to conduct a campaign of defiance, under which he says he and his team will resist anything they deem illegal, present potential flashpoints between Mbabazi’s and Museveni’s supporters on one hand, and Mbabazi’s and Besigye’s supporters and security agencies on the other.

“Violence is a foregone conclusion because of the state’s attitude towards violence. Its resumption of militias ahead of the elections and its training of the so-called crime preventers are likely to trigger violence because the population has been forewarned and so it has prepared itself to resist these forces as we saw in the NRM primaries,” said Dr Sabiti Makara, who researches elections in Uganda.

Another source of tension is likely to arise from a direct alliance between Mbabazi and Besigye. Although the two men failed to agree to a joint candidate, both camps are still hopeful some form of collaboration will be agreed to and implemented on the campaign trail.

“Dr Besigye has and still maintains his supporters but Mbabazi equally has his supporters and they are not necessarily opposition supporters. They seem to come more from the NRM or are people who normally do not vote,” said Dr Patrick Wakida, the chief executive officer at Research World International, which has conducted several polls on Uganda’s politics.