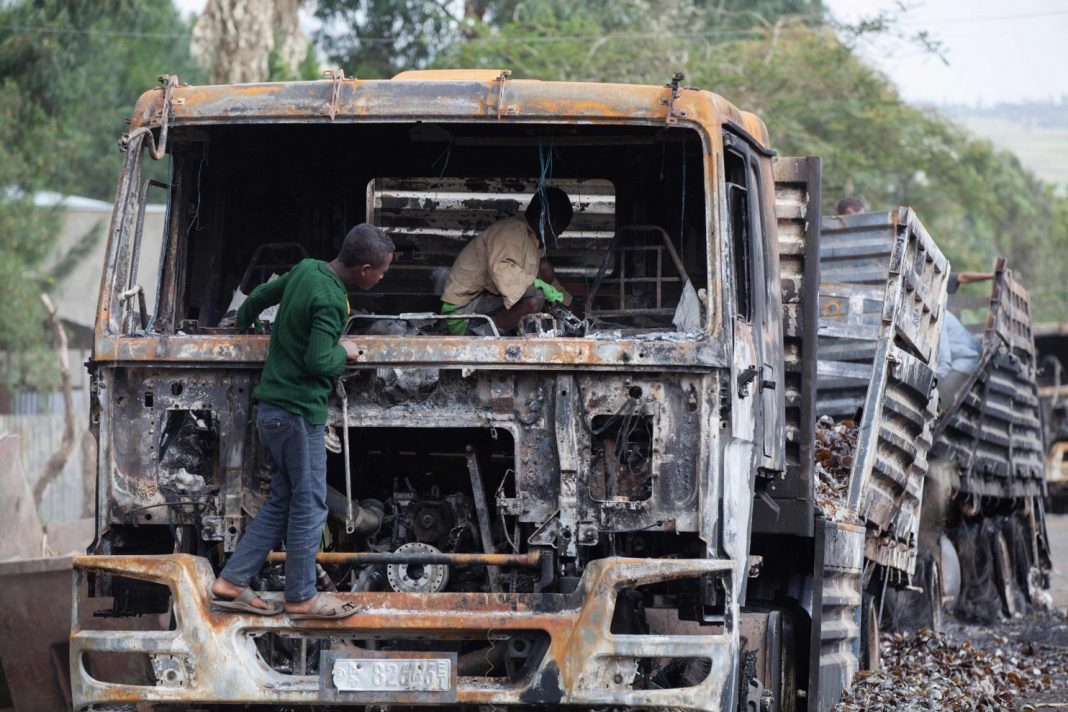 ALAGA DORE (HAN) November 3.2016.Public Diplomacy & Regional Security News. By Paul Schemm. The smell of rotting mango and passion fruit still hung in the air over the blackened shell of a juice factory near this village more than two weeks after the plant was looted and burned by an aggrieved mob.

As employees swept out the empty rooms, Abraham Negusay, AfricaJuice’s production manager, worked on his laptop in the former lab.

“We are evaluating the damage and destruction, cleaning up the factory and doing a cost analysis,” he said, noting that the Dutch company had yet to decide whether to keep its multimillion-dollar investment in Ethiopia.

The assailants, estimated by AfricaJuice farm managers to number in the thousands, descended on the factory in the Upper Awash Valley, about 90 miles southeast of Addis Ababa, on Oct. 4. Wielding axes, spears and some firearms, they overwhelmed the armed guards while workers fled into the nearby forest.

“It was not expected, so many people at once,” Negusay said.

The attack was part of a week-long spasm of violence that followed a deadly stampede on Oct. 2 during Irreecha, a thanksgiving festival held annually by the Oromo, Ethiopia’s largest ethnic group. That day, police fired tear gas into crowds chanting anti-government slogans, and in the ensuing panic, dozens died. The opposition put the death toll in the hundreds.

In response, mobs attacked industrial farms and factories across the country, focusing on those with state ties or owned by foreigners. Several tourist lodges were also targeted, and at least two were destroyed. Once held up as the hot, new investment destination in Africa because of its cheap labor, plentiful water and stability, Ethiopia’s industrialization program is at risk of faltering — along with its impressive economic trajectory — as current investors reconsider their options and new ones shy away.

The unrest has shown the limits of the authoritarian nation’s Chinese-style development plan, which favors growth over public accountability, even as residents in some areas have defended the factories as their main source of employment.

A largely agricultural economy, Ethiopia has been luring foreign investors for the past decade to set up light industries, such as textile companies, and agribusiness ventures, such as flower farms.

Foreign investment has increased 10-fold, from $265 million in 2005 to $2.16 billion in 2015, according to the World Bank, and the country has surpassed Kenya as East Africa’s largest economy. The unrest started last year here in Oromia, in central Ethi­o­pia, when some residents began protesting the expropriation of land for foreign industries, poor local administration and their ethnic group’s historic marginalization. It quickly spread to the northern Amhara region, and there were sporadic attacks on farms and factories.

That all changed after the Irreecha stampede, when activists abroad called for five “days of rage” and systematic attacks on foreign and state enterprises.

What started as a holiday celebration for Ethiopia’s Oromo people turned into a deadly protest as demonstrators tried to flee police firing tear gas and warning shots into the crowd. It triggered a stamped that killed dozens. (Reuters)

The government responded to the violence by declaring a state of emergency on Oct. 8. Thousands were arrested, and bans were imposed on protesting, inciting others to protest, damaging public property and communicating with terrorist groups — including listening to anti-government media outlets based abroad.

The measures have prompted concern from the United Nations, Germany and the United States, which noted that they don’t address the political crisis underlying the protests.

Ethiopian officials say the state of emergency was the only way to restore order in the country.

“We have been able to arrest the rate at which the destruction was visited on our people, and the violence has been controlled,” then-government spokesman Getachew Reda said last week. He was replaced in a government reshuffle Tuesday.

An army unit is camped out in front of AfricaJuice, and machine-gun-mounted pickup trucks circle the lush Awash valley.

President Mulatu Teshome has also toured devastated factories and promised investors that the government will help them recoup their losses.

Interviews with elders and the bystanders to the attacks in the Oromo region made clear that the deaths at the Irreecha festival left people all across the country desperate to vent long-simmering anger over land acquisitions for foreign industry. AfricaJuice was reportedly involved in one such land dispute.

In a few cases, though, investors’ ties to a particular community may have saved their farms. Marc Driessen, a Dutch flower grower, recalled watching smoke billowing into the sky as the AfricaJuice factory burned just six miles from his own 12-year-old farm, Maranque Plants.

“It was really an end-of-the-world kind of thing,” he said. Workers tend flowers at Maranque Plants, a Dutch flower farm near the Ethio­pian village of Alaga Dore that was the only operation in the area to remain untouched during the recent unrest. Village elders managed to dissuade the protesters from attacking the compound, arguing that it had benefited the local community. (Zacharias Abubeker/Agence France-Presse Via Getty Images)

Inside the vast greenhouses that would be so vulnerable to a mob, hundreds of workers — mostly from nearby Alaga Dore — tended the delicate chrysanthemums, dahlias and poinsettias that would later be packed up and shipped to 35 countries.

As hundreds of angry young men and women approached the main gate on Oct. 4, Driessen and his managers feared the worst — until the village elders intervened.

“We went on motorbikes,”elder Shumi Telila recalled as he sat under a tree in Alaga Dore. “We said: ‘This is our property. We are getting a lot of benefit from this company. You cannot burn this.’ ”

The young villagers were beside themselves with grief and rage over the deaths at the festival, he said, but they listened to their elders and left the farm alone.

At least 800 people from Alaga Dore work at the farm, which also maintains the village’s water pump and generator and poured a concrete floor for its school.

Yet just 18 miles away, the Giving Tree Nursery was attacked by another group two days later despite the Belgian company’s own efforts to support the local community.

Ingrid van der Schaaf, Giving Tree’s research manager, was there when reports of the attacks began, and she fled for the capital in a harrowing cross-country drive.

Workers and some locals tried in vain to protect the farm, which grows beans, peas, peppers and okra for export to Europe. When van der Schaaf returned, she found much of it gutted.

“They destroyed the manager’s compound and staff quarters,” she said, speaking by phone from the Netherlands. “It was shocking to see.”

The fields and some of the bigger equipment were untouched, but the farm now has no means to sow, harvest or transport a crop. “You see all the damage and think, ‘For what?’ ” van der Schaaf said. “There are 500 jobs.”

The Machiels Group, which owns the farm, is still deciding its future in Ethiopia.

“What the next few months will bring, you simply don’t know,” said its foreign projects manager, Hendrik Schoebrechts, speaking from Belgium. “Will there be another uprising?” People pass between condominiums in Jemo, on the outskirts of Addis Ababa, in August. The condominiums, the Ethiopian version of social housing, have become a symbol of the country’s development and a way for authorities to clean up downtown Addis, create jobs and house more than 3 million people. (Zacharias Abubeker/Agence France-Presse Via Getty Images)

According to Emma Gordon, East Africa analyst for Verisk Maplecroft, a U. K-based risk consultancy, many investors are waiting to see whether the government has a better solution to the unrest than repression.

“The protests have raised issues that will need more than a military response, and unless there is a perception that some of these underlying problems are being tackled, I think risk-sensitive sectors will be cautious to enter the country,” she said.

In the wake of the state of emergency, the government has reshuffled the cabinet, adding several more Oromo ministers and promised a more representative electoral system that will bring in opposition parties, which since 2015 have not had a single seat in Parliament.

New elections, however, are four years away, and the political crisis stems in part from the lack of faith Oromos have in their pro-government politicians.

Walking the perimeter of his farm, the sole untouched operation in the area, Driessen expressed doubt about the future, given the recent violence.

“It will affect new investors dramatically,” he said.