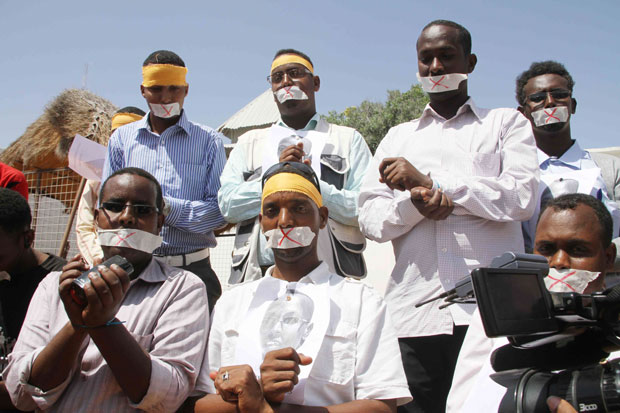 The International Federation of Journalists (IFJ) has today demanded an end to the threats and intimidation of journalists in Somalia following new attempts by local authorities to undermine independent journalism.

Hiran region governor Yusuf Ahmed Hagar ordered journalists in Beledweyn town not to cover political campaigns which were not “authorized” by the administration and Ministry of Interior and Federal Affairs. He said any journalist not obeying the order would be suspended or arrested.

In a second case the security and intelligence forces of Jubaland Administration arrested freelance journalist Jeylani Hussein Yusuf on Tuesday, 30 August 2016, in connection with news reports he had published in Mogadishu.

Omar Faruk Osman, Secretary General of the National Union of Somali Journalists (NUSOJ), an IFJ affiliate, said: “These moves are clearly designed to deter journalists from carrying out their legitimate work in order to ensure an information blackout for politicians in respect of uncomfortable issues journalists want to report on. It is a tactic simply calculated to intimidate and harass journalists

“The arrest of Jeylani Hussein Yusuf is an affront to the freedom of the press and the media in general. Jubaland authorities must release Jeylani and stop targeting journalists for doing their work,” said Osman.

The IFJ backed NUSOJ’s calls for the Somali authorities, including federal and regional authorities, to uphold the rights of journalists to report with full freedom of expression as protected under Article 18 of Provisional Constitution of Somalia, Article 19 of the Universal Declaration of Human Rights and Article 19 of the International Covenant on Civil and Political Rights.

IFJ President Philippe Leruth said: “The continued harassment and intimidation of Somali journalists must stop and they must be allowed to report freely on all political events and all issues. Threats of arrest or suspension are an affront to the principles of press freedom”.