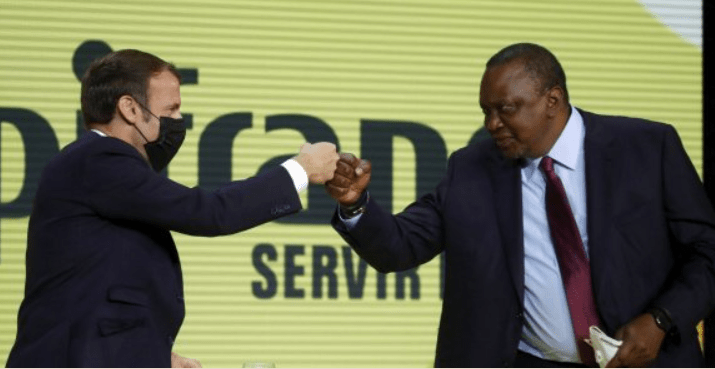 During his five-day official visit to France, the Kenyan President pushed for French investments in his country while defending the candidacy of Amina Mohamed at the head of the WTO.

Kenyan President Uhuru Kenyatta made a vibrant plea in favor of a win-win partnership with French companies when he addressed French leaders gathered by the Medef in the salons of the Cercle Interallié on October 2.

“Ten years ago, very few French companies were still present in Kenya. They are more than a hundred today”, said Kenyatta, on a five-day official visit to France.

The latter had signed, a few minutes earlier, with Rémy Rioux, CEO of the French Development Agency (AFD), a loan agreement of 100 million dollars for SMEs.

While the country is experiencing significant population growth, many infrastructure and energy contracts are being finalised, a year and a half after French President Emmanuel Macron’s visit to Nairobi.

On October 1, what is described as the largest public-private partnership contract in East Africa was signed with Vinci and the Meridiam fund (€1.6 billion). It concerns the 30-year concession of the Nairobi-Mau highway, which will link the port of Mombasa to the Great Lakes region.

“We have started to raise funds. We have been preparing for this for a long time. The Covid-19 has delayed things a bit”, explained Thierry Déau, the boss of the Meridiam fund. Other contracts initialled: the extension of line 4 of the Nairobi metro, where Transdev, Egis, Vinci and Alstom will cooperate, as well as the connection of the Menengai power plant, which will involve GE France.

A common European position on who should lead the WTO

On the sidelines of this investment drive for Kenya, Uhuru Kenyatta and his delegation also lobbied for the candidacy of Amina Mohamed to take over the leadership of the WTO.

At the end of the working dinner on September 30 at the Elysée Palace and his participation in a forum organized by the European Investment Bank, along with Emmanuel Macron, Kenyatta raised the subject, seeking France’s support for his compatriot.

“The Kenyan delegation obviously promoted its candidate. But this is an issue on which we are trying to find an agreement with our European partners”, said a senior French diplomat.

The names of the two candidates selected for the final duel will be announced on October 6.