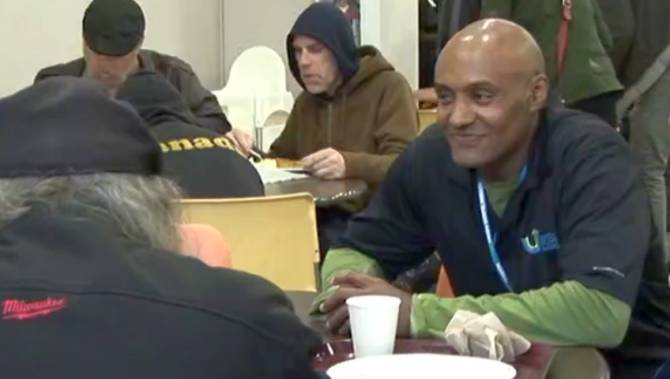 He’s been through a lot to get there. He was only 15 years old when a civil war in his native Ethiopia forced him to be a child soldier.

He says he “doesn’t know how many” people he shot during his time as a child soldier.

He escaped his war-torn homeland by stowing away on a ship to Canada where he started a new life, eventually getting married and having a daughter.

But he couldn’t get those images of wartime out of his mind so he started to drink to numb the pain.

Damtawe later moved to Portland, Oregon where he fell deeper into addiction.

“I started doing cocaine and then I got hooked up with gang members,” he said.

After two suicide attempts, he knew he had to make a change so he returned to B.C. He found himself on the Downtown Eastside where he fell prey to drugs yet again.

“Then I met this woman, we partied together. We did a lot of cocaine and partied. In the morning, she went to go to the bathroom. I opened my door and she is passed away in front of my door.”

Damtawe says the thought of reuniting with his young daughter helped keep him on the straight and narrow.

“It’s only for my daughter,” he said. “When I came to the program, I kept saying to myself, ‘I want to see her one day.’”

When he finally reunited with her, he broke down in tears.

“Then she asked me this question I’ll never forget. She said, “Daddy, if you love me, why did you leave me?’ That’s the question that hurts.”