Home frontpage FIFA World Cup Brazil 2014: Fans were right behind me after... 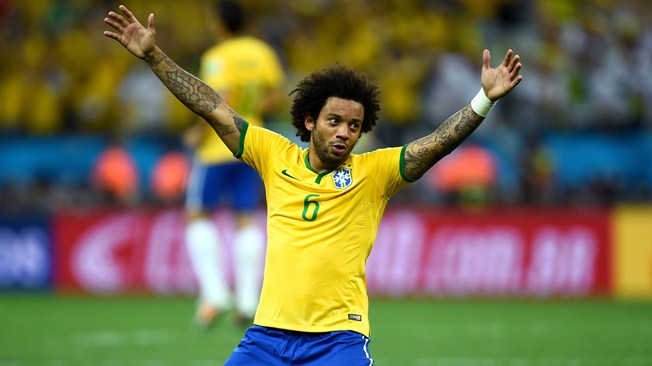 Sao Paulo (HAN) June 14, 2014- Geeska Afrika Online. In the week leading up to their first match at the 2014 FIFA World Cup Brazil™, the members of the Brazil squad spoke a lot about the sense of calm and composure that prevailed in the camp. As soon as they stepped out on to the pitch, however, Luiz Felipe Scolari’s men found their patience and resolve severely tested by a spirited Croatia side, and none of them more so than Marcelo. Though A Seleçao would ultimately recover to claim the three points, the Real Madrid fullback endured a stern examination of his character in the opening stages of the game.

Marcelo’s travails came about in the 11th minute of the game, when Croatia striker Nikica Jelavic attempted to force Ivica Olic’s cross home only to deflect it into the path of the unwitting defender, who had little time to react and ended up turning the ball into his own net – the first such goal that Brazil have ever conceded in the world finals.

As if the thought of putting through his own net in the opening match of a tournament that his country is hosting were not enough for the unfortunate Marcelo to deal with, there was also the fact that the game was being played in Sao Paulo, a city whose supporters are known for being especially hard to please. Given the stakes, then, just how would the player react?

Marcelo said: “The first thing I thought was just to stay calm and not make it worse for the team. If I’d let my head drop, I might have ended up making life even more difficult for us. That was the first thing I had to make sure I didn’t do.”

That measured reaction showed the maturity of a player who once found it much harder to keep his cool. In recent seasons, however, he has cut a composed and unruffled figure for his club side Real Madrid, and was one of the keys to their comeback win in the recent UEFA Champions League final.

That said, his experience would have counted for little had it not been for the support of his team-mates and the thousands of fans who packed into the Arena de Sao Paulo for Brazil’s first outing of the tournament.

“The fans were right behind me after I scored the own-goal and they were chanting my name,” he said. “My team-mates also came up to me and that helped me clear my head straightaway. I got back into the game immediately.”

The setback did not stop the rest of Scolari’s men from keeping their minds on the job in hand. Though goalkeeper Julio Cesar and the much-vaunted Brazilian defence would be tested several more times before the night was over, the hosts stuck together and remained cool, calm and collected, aware that they had nearly 80 minutes in which to repair the damage.

“I’m delighted at how the team reacted and that we had the presence of mind to come up with the perfect response to the situation,” match-winner Neymar.

In scoring his two goals, the nimble forward also had to bide his time to some extent, first watching as his low bobbling shot crept its way past Stipe Pletikosa and in off the post to bring the Brazilians level, and then looking on anxiously as the Croatian keeper got a hand to his firmly struck second-half penalty but could not prevent it hitting the back of the net.

“The ball struggled to get over the line for both my goals but they all count,” said Neymar. “It’s seeing it lying there in the back of the net that matters.”

Marcelo’s own goal also counted, though the defender has well and truly put it behind him.

“These things happen in football,” he said. “We started off a little bit tense today, but we managed to turn the game around, thanks to the fantastic support of the fans.”

Relieved at the outcome, Marcelo can look back with satisfaction on a night when he made a significant comeback of his own. FIFA