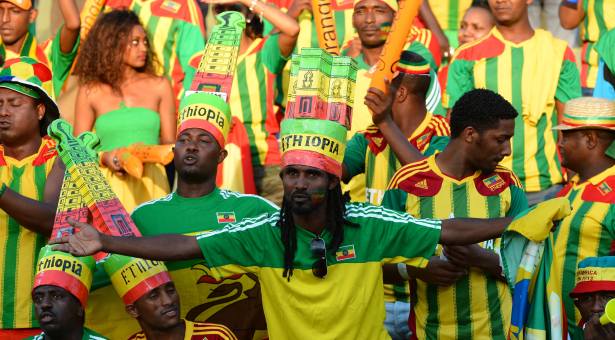 Addis Ababa (HAN) October 14, 2015 –Geeska sports news The Ethiopia national women’s team who flew to Ouagadougou last Thursday beat the home Burkina Faso side 2-0 in the first leg of the women’s football Olympic qualifier. The match that was played Saturday in Ouagadougou was postponed two times in the span of seven days. The return match is set to take place in two weeks’ time.

The country’s football governing body, the Ethiopian Football Federation (EFF) expressed delight by the result earned against Burkina Faso. Only 19 players of the 25 went to Burkina. The head coach Asrat Abate dropped 6 players a couple of days before their departure.

Despite the calm down, the Burkina Faso football association submitted a request to postpone the match until the situation is fully under control. After scrutinizing the security situation, the continent’s football body, CAF, fixed the date for the match on Saturday. Reports confirmed that the players faced no security problems while they were in Ouagadougou.

The Ethiopian team reached this stage beating the Cameroonian side with an aggregate 2-1 result. In the first away leg against Cameroon the Ethiopian side played out a goalless draw while in the second leg they managed to win with a 2-1 difference.

The Ethiopian captain and the double scorer in the match against Burkina Faso Loza Abera said that the result they obtained on Ouagadougou is a big advantage to go through. “We played fairly well in the first match against Burkina Faso. We got little resistance from the host team. What is true is that our side has never been in the Olympics but last time we were close to go to London. We conceded defeat in the final match against South Africa. This time we will do everything possible to go to Rio,” Loza Abera said. It was Loza’s double who sank Cameroon in the first round 2-1 aggregate win over their side. “Winning gives me a special meaning for me and winning with goal I score is extraordinary for me. Whoever scores the most important thing in a match is victory over the opponents,” Loza remarked.

EFF also made it clear that getting berth at the Olympics is one more big achievement in their tenure. Africa will be represented at the 2016 Rio Olympics with two teams.