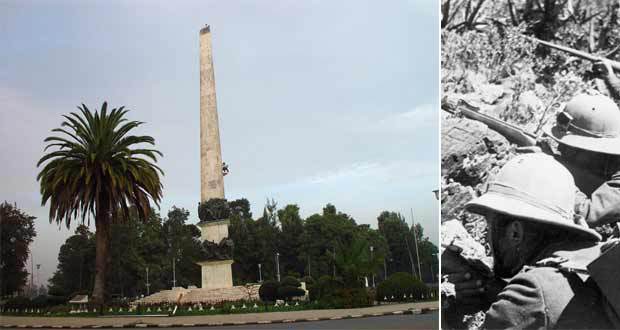 ADDIS ABABA February 22, 2016 – Public Diplomacy and Regional Stability Initiatives News. As Ethiopia remembers thousands of people killed by Italian forces in Addis Ababa 79 years ago, survivors and veterans remain angry that Italy authorized a mausoleum for the man who ordered the deaths.

Rodolfo Graziani, a committed Italian Fascist officer, is widely held responsible for the deaths and internment of thousands of people by occupation forces around Feb. 19, 1937.

Three days of killings and reprisals were triggered after two Ethiopians attempted to assassinate Graziani.

One historian told Anadolu Agency that between 6,000 to 12,000 people were killed over three days of violence.

Italy invaded Ethiopia for the first time in 1896 but was defeated by Ethiopians under the leadership of Emperor Menelik II. Italy attempted to colonize Ethiopia a second time in 1935 but was driven out after five years of fighting.

Ethiopians held remembrance ceremonies held Saturday in the capital and throughout the country, attended by officials, survivors and war veterans.

Zewdu Temtime, a lecturer at the History Department of Addis Ababa University, told Anadolu Agency on Saturday that “the Italians targeted the massacre at the educated, the young and the elites that were engaged in leading the liberation movement”.

According to Zewdu, “the invading forces locked residents of Addis Ababa in their homes and burned them alive and destroyed the city.

“They also continued the massacre to a famous monastery in northern Ethiopia, where they believed that the leaders and collaborators of the assassination attempt took shelter, and massacred 1,500-3,000 monks.”

However, other historians have put the total number of people killed at 30,000.

Addis Ababa resident Gedame Abate, 92, recalled the massacre to Anadolu Agency: “My parents had a 12-room house in Addis Ababa locally known as the Gullele area.

“Some of the rooms were rented. When the Italians began massacring citizens, all people who were living in that place locked their doors. We ran away to another part of the city.”

“Later I found out that the Italians burnt the house and the occupants to ash.”

She added that she saw corpses littered in the city’s alleyways: “It was the most horrifying thing that lives with me.”

Colonel Tessema Lemma, 81, who was barely two years old at the time, was lucky to survive the killing with his family.

“I grew up with horror stories of the killings and remember how my family and neighbors were hurt by the action of the Italian soldiers,” he said.

In 2012, a mausoleum and park in the village of Affile, east of Rome, was dedicated to the memory of Graziani.

The president of the Ancient Ethiopian Patriots’ Association, Daniel Jote Mesfin, told Anadolu Agency that Ethiopians strongly oppose the honor given to Graziani, who led the indiscriminate massacre.

“What does honoring such a person demonstrate? This means supporting fascism and encouraging generations to engage in similar acts,” Daniel said.

Ethiopians are denouncing the honor given to Graziani, however, it depends on Italy’s willingness to stop honoring him, he added.