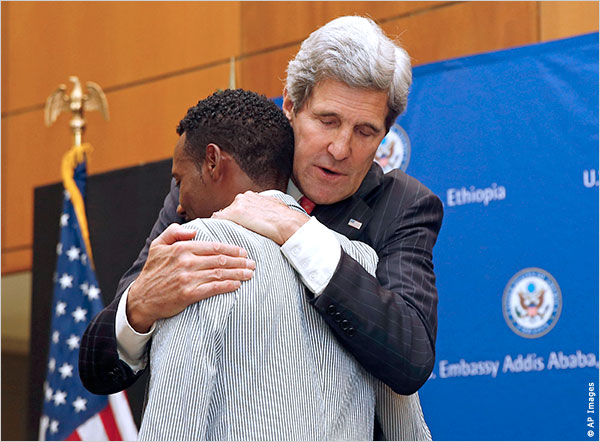 Addis Ababa (HAN) April 18, 2014 – In this section Sports Opinion By, John Powers (bostonglobe) –  In the beginning there was Abebe Bikila, the imperial guard who ran barefoot atop Roman cobblestones by torchlight in 1960 and became the first black African to win the Olympic marathon. The Ethiopians owned the distance then, winning three consecutive gold medals at the Games with Bikila and Mamo Wolde. That was before boycotts took them off the global stage, before the prize money arrived and the Kenyans came by the dozens, then the hundreds, to take over the roads. 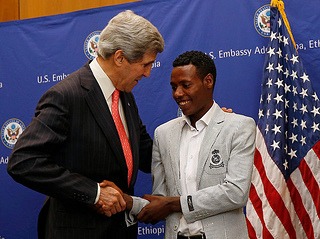 The Ethiopian winner of the men’s race at the Boston Marathon says he is returning his winner’s medal to honor the city and those killed and injured in the terrorist bombings near the finish line of one of the world’s top running events.

Lelisa Desisa says sport should be a pleasure and never a battlefield. He made the announcement Sunday at a ceremony with U.S. Secretary of State John Kerry. Kerry also honored the woman’s runner-up and the men’s third place finisher. All three athletes are from Ethiopia.

Now Bikila’s countrymen and women have been coming off the track and onto the hardtop and restaking their country’s original claim to primacy over 26 miles. “From the beginning Ethiopia was a name in marathoning,” says coach Haji Adillo. “Now, Ethiopia has become at the level of the Kenyans.”

The Ethiopia-Kenya rivalry is both friendly and fierce. “We are neighbors and we have the same talents for long distance but it is a big rivalry,” says Markos Geneti, who’ll be returning with four of his countrymen to take on eight Kenyans in Monday’s 118th running of the world’s most fabled road race while the women, led by two-time New York runner-up Buzunesh Deba and Mare Dibaba, have a quintet to take on Kenyan defending champion Rita Jeptoo and half a dozen of her countrywomen. “We fight for our country and for ourselves.”

Drawn from the track

Kenya, of course, still dominates the planet’s highways. Their men and women won 27 of last year’s 45 top-tier races, including 10 of the 14 World Marathon Majors titles. But the Ethiopians have been making inroads.

Tiki Gelana won the Olympic crown in London, the first woman from her homeland to do it since Fatuma Roba in 1996. Lelisa Desisa and Gebre Gebremariam finished first and third in Boston last year, their country’s best men’s showing here, and Desisa and Tadese Tola won silver and bronze at the Moscow world championships. This year the Ethiopians have won 11 of the 20 “Gold Label” marathons and have posted six of the top 10 men’s and women’s times.

The Ethiopians long have dominated the 10,000 meters on the oval, winning eight gold medals at the last six Olympics and 15 at the last 11 world championships. Recently, they’ve been enticed by the same macadam motherlode that lured the Kenyans in the ’80s.

“One of the major factors is the decline of good opportunities on the track for a lot of the athletes,” says Terrence Mahon, who coaches the Boston Athletic Association’s high-performance distance group. “A lot of those races have disappeared or the money has gone away so it has pushed this critical mass to the marathon. The marathon is the one event that keeps growing. That creates an allure. Why suffer on the track to run 27 minutes when they can run a 2:05 marathon? That’s a huge incentive.”

“I suppose my life has changed,” mused the 24-year-old from Ambo who earned $400,000 for his labors, nearly 1,000 times his country’s annual per capita income. “But besides that, I have become a known athlete in the world.”

It’s not as if Ethiopia hadn’t produced marathon stars before. After Bikila and Wolde came Roba, who won Boston three straight times (1997-99) after she collected the gold medal in Atlanta. Haile Gebrselassie, the two-time Olympic champion on the track who was a delayed-vocation marathoner, set the world record.

What’s different now is the Ethiopians have significant depth below their aces, especially on the women’s side where Mare Dibaba (Xiamen), Mula Seboka (Dubai), Tirfi Tsegaye (Tokyo), Geda Ayelu (Rome) and Abebech Afework (Rotterdam) all have won top-tier races this year. “The new generation started 10 years ago,” says Mahon. “We just didn’t hear about it until now.”

The Ethiopians have been playing catch-up after the lost decade when they joined the African walkout of the 1976 Olympics in Montreal and their Marxist government kept them out of the 1984 and 1988 Games in Los Angeles and Seoul for political reasons. “The Kenyans have more numbers than us,” acknowledges Gebremariam, who beat a brace of Kenyans when he won in New York in 2010 in his marathon debut. “It will take time to have a mass like that but I think we are on that track.”

The Ethiopians have many of the same things going for them as do their southern neighbors. They are born and train at altitude — Addis Ababa, the capital, is more than 7,700 feet above sea level. They have light and lean frames. They have a history of success with distance running. And they have both an aptitude and an appetite for the long haul and the pain that comes with it.

“One of the most striking things I saw wasn’t anything from the local runners,” says Ryan Hall, the two-time US Olympic marathoner who recently trained in Ethiopia for a month in preparation for his return to Boston. “It was what I saw in the eyes of old ladies with absolutely massive loads of firewood literally tied to their backs. They would carry these loads almost doubled over as they walked sometimes as far as 30 kilometers so that they could make $5 to sell the wood when they arrived from their long and treacherous journey in Addis. I’ll never forget the look in these old ladies’ eyes. What was communicated to me was, ‘No matter what it takes, I am going to make it.”

While the Ethiopians can’t yet match the Kenyans’ sheer numbers, the hundreds of competitive runners training in numerous camps, they employ a similar model on a smaller scale that still turns out dozens of contenders.

“Everywhere I went, even when I was buried out in the forest and I thought there couldn’t possibly be anyone else around, sure enough a massive team of runners would come zig-zagging in a single-file line through thickly wooded eucalyptus trees,” says Hall, who trained at Yaya Village, a self-described “runners paradise above the clouds” just outside of the capital.

If the Ethiopians’ system isn’t quite as extensive as the Kenyans’ it’s decidedly more insular and controlled. “If the federation doesn’t want you to go to a race, you don’t go, you don’t get the visa,” says Mahon. “They do what’s best for Ethiopia, not what’s best for the athlete.”

That approach is nothing new. In 1988, when the Africans made their initial splash in Boston, Ethiopian officials pulled their three runners four days before the race and sent them to Rotterdam instead. “Our system is very clear,” says Gebremariam. “No one goes outside the rules. Everyone knows his responsibility.”

The biggest responsibility — and privilege — is to win at Olympus, where the Ethiopian men and women have claimed half a dozen marathon gold medals at the 11 Games where they’ve competed since 1960.

All 45 of Ethiopia’s Olympic medals have come in distance running, nearly half of them in the 10,000. But the move to the marathon is unmistakable. “The 10,000 is not huge like before,” muses Adillo, who coaches Desisa, Dibaba, and Tilahun Regassa. “Most of them want to be in the marathon.”

The payouts are Midas-like by comparison. Boston’s men’s and women’s winners each receive $150,000 with a $50,000 bonus for a world-best time and $25,000 for a course record. “But it’s not only about money,” says Geneti, who was sixth here last year. “It is also about achievement.”

His countrymen didn’t win here until Abebe Mekonnen did it in 1989. (Bikila and Wolde both were busted by Heartbreak Hill in 1963). Now they’ve managed it three times since 2005. The Kenyans still may be a few steps ahead in the overall chase but the Ethiopians aren’t conceding Copley Square. “Kenya dominated for a long time in Boston,” concedes Regassa. “Now, I think, Ethiopia will dominate this year.” John Powers , Boston Globe.


–
Speaking Freely is an Geeska Afrika Online and Horn of Africa Newsline (HAN) feature that allows guest writers to have their say. if you are interested in contributing or sending News, Views and Comments. Please email at: han@geeskaafrika.com