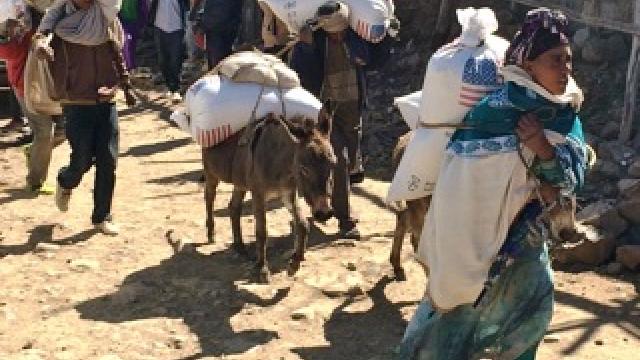 ADDIS ABABA (HAN) December 21, 2015 – Public Diplomacy and Regional Stability Initiatives News. The U.S. Agency for International Development (USAID) announced an additional $88 million in humanitarian assistance for Ethiopia today to address the humanitarian crisis resulting from the impacts of the El Niño phenomenon.The additional aid brings the total U.S. humanitarian assistance for Ethiopia to more than $435 million since the start of fiscal year 2015 and increases funding for nutrition, water, food, sanitation, and hygiene support.

Ethiopia is facing a humanitarian crisis as consecutive seasons of below-normal rainfall-exacerbated by the effects of El Niño-has lowered agricultural production, decimated livestock, and deteriorated food security and nutrition conditions in some parts of the country. Ethiopia currently has one of the largest food insecure populations in the world, which has increased dramatically since August 2015, as it is experiencing one of the worst droughts in decades.

By early 2016, the Government of Ethiopia estimates that 10.2 million people will be in need of relief food assistance. This is in addition to 7.9 million chronically food insecure covered by the Government of Ethiopia-led Productive Safety Net Program, supported by USAID and the donor community. Approximately 5.8 million people will need clean water, 1.7 million children and lactating mothers will require nutritious food supplements, and as many as 435,000 children will require treatment for severe acute malnutrition in 2016.

Building on earlier food assistance to Ethiopians impacted by El Niño, USAID will provide more than 116,000 metric tons of relief food aid to address the needs of 2.6 million people in 74 districts. USAID will also scale up rapid response systems for nutrition and water, and support partners to jumpstart pipelines of relief supplies, helping provide much needed aid for peak needs during the June to September 2016 lean season.Combined with previous contributions, USAID is supporting 3.9 million Ethiopians with relief food assistance through non-governmental organizations and the World Food Program.

The United States commends the Government of Ethiopia for its early and appropriate response to the crisis, including providing $297 million in relief resources. USAID’s resilience investments-including efforts to safeguard livestock and other assets and inject cash transfers into development programs in drought-prone areas-are also helping Ethiopian households cope with the impacts of El Niño.

Building upon the foundation of the Productive Safety Net Program, these measures are key to the long-term food security programs the United States supports in Ethiopia through Feed the Future, the U.S. Government’s global hunger and food security initiative.However, due to the severity of this crisis, additional resources from global donors are still urgently needed to save the lives of those most in need in Ethiopia. Source: usaid