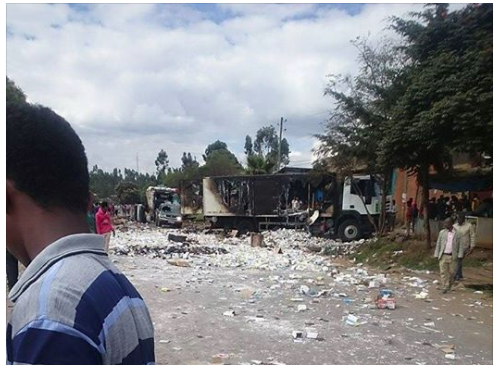 Two members of the Agazi special forces of the regime were killed in an ambush carried out by unknown individuals in Ginchi 50 miles west of Addis Ababa. Two other members of the force were wounded in the grenade attack on Friday at a gas station.

Protests have continued in Holeta, 24 miles west of the capital this morning with protesters blocking roads with rocks and burning tires. A truck was set ablaze and Agazi forces took control of the town later in the day.

The town of Ambo, 74 miles west of the capital, that has seen the killing of 8 civilians yesterday has been quiet today as funeral of the victims were conducted. Doctors for the city hospitals confirmed the victims died of gunshot wounds. Additional convoys were seen entering the town today.

Meanwhile, a support group for the Oromo Federalist Congress (OFC) abroad called for the people to intensify their struggle against the regime. It also called for the regime to desist from instigating violence among ethnic groups in the country.

The U.S. Embassy is aware of reports of violent protests and road closures in the areas of the region of Oromia near Ambo, Bako, and Holeta, west of Addis Ababa.

U.S. Embassy personnel are permitted to travel to these areas on a case by case basis only.  If you are currently in Ambo, Bako, Holeta, or their surrounding areas, please use extra caution.