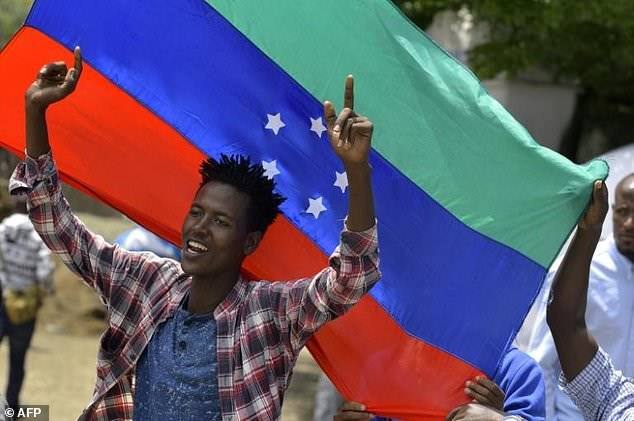 Members of Ethiopia’s Sidama ethnic group are expected to vote Wednesday to form a breakaway regional state — a milestone that risks further destabilising the country ahead of next year’s national elections.

The Sidama push for statehood already triggered days of unrest in July that left dozens dead and prompted the government to place Ethiopia’s southern region under the control of soldiers and federal police.

In Hawassa, the regional capital, some fear a return of those tensions, but resident Cherinet Deguye said the violence will have been worth it if the referendum passes and the Sidama get a state of their own — an outcome analysts believe is likely.

“The process leading to the referendum has come with a bitter price with many of our people killed and injured,” Cherinet told AFP last week shortly after registering to vote.
“But there is a great deal of excitement and the atmosphere is currently peaceful.”

The referendum touches on the issue of autonomy — the bedrock of a federal system designed to provide widespread ethnic self-rule in a hugely diverse country of more than 100 million people.

At present, Ethiopia is partitioned into nine semi-autonomous regional states. The constitution requires the government to organise a referendum for any ethnic group that wants to form a new entity.

Even if the referendum proceeds smoothly and the result is accepted, it could embolden other groups that have the same goal and inflame broader ethnic tensions.

At least 10 other groups have submitted statehood bids in the south.

These include merging the current ruling coalition of ethno-regional parties into a single political party.

The Sidama — who number more than three million — have agitated for years to leave the diverse Southern Nations, Nationalities, and Peoples’ Region.

But Abiy dithered on responding to the Sidama referendum request, and Sidama nationalists vowed to move ahead with a self-declaration of statehood on July 18.

The Sidama Liberation Movement, a leading voice for statehood, backed away from self-declaration at the last minute, but that was not enough to stave off protests that devolved into ethnic clashes.

Security forces opened fire on protesters in Hawassa and elsewhere, and Sidama youth attacked non-Sidama residents of the region.

Hundreds more were arrested, dozens of whom remain behind bars, according to Sidama activists.

How security forces’ respond during and after this week’s vote is a “cause of worry”, said Fisseha Tekle, a researcher with Amnesty International.

Abiy has spent recent months trying to put a damper on other statehood bids, pleading for patience in meetings with leaders of ethnic groups trying to follow the Sidama example.

Meanwhile, the implementation of the Sidama referendum is expected to raise a host of thorny issues.

One major sticking point is the status of Hawassa, which the Sidama are eyeing as the capital of their would-be state.

The city is ethnically diverse — only about half the population is Sidama — and up to now has served as the administrative centre for the entire southern region.

In the short term, tensions over Hawassa may be defused by a recent agreement that will allow the regional government to stay in the city for two five-year election terms.

Desalegn Mesa, spokesman for the Sidama Liberation Movement, said members of other ethnic groups in Hawassa “shouldn’t feel threatened” about their security.

“Many ethnic minorities have found wealth, made their living and even formed marriage bonds with ethnic Sidamas for decades and this will continue in the future,” he said.

But not everyone is convinced.

“We’re living in fear. We’re afraid things will not change for the better after the referendum is held,” said Tesfaye, a non-Sidama resident of Hawassa who did not want his full name used for safety reasons.

“I’m afraid that if Sidama becomes a regional state what will come next is institutionalised discrimination against ethnic non-Sidamas.”