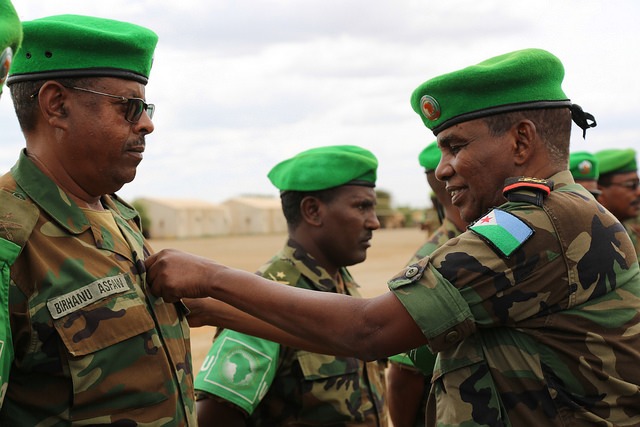 Djibouti  (HAN) November 13th, 2020. Regional Security and Stability. The AMISOM led forces in Somalia through African Union peace and security office in Addis Ababa were removed all Tigrayan officials, since they cannot be trusted for the morale of AMISOM Security and Military Service initiatives in Somalia.

African Union briefing note  also came on Friday that the African Union (AU) had dismissed its security head, an Ethiopian national (TPLF member), after Abiy’s government accused him of disloyalty.

An AU official confirmed the two letters. The defence ministry did not immediately respond to a request for comment.

Horn of Africa expert Rashid Abdi said Gebreegziabher was Tigrayan and his departure from the AU post was part of the Abiy government’s efforts to sideline prominent Tigrayans.

“The purging of competent Tigrayan officials in the midst of the conflict is not good for the morale of the (security and military) services,” he said, referring also to other removals of Tigrayan officials since the military offensive began.

“It also plays into the notion that this is essentially an ethnic war masked as a centre-periphery power struggle.”

Abiy’s opening of political space since taking office in 2018 has exposed ethnic fractures in Africa’s second most populous nation of 115 million people. Before the Tigray flare-up, clashes killed hundreds and uprooted hundreds of thousands.

Meanwhile, civilian communications in Tigray are cutoff  and local/international mass media have been barred, but federal Ethiopian security sources have told Reuters hundreds of combatants have been killed on both sides.

Both TPLF leaders and PP (prosperity party) leaders of Federal government of Ethiopia have accused each other of harming civilians.

Rights group Amnesty International said on Thursday that scores and possibly hundreds of civilians were stabbed and hacked to death in the region on Nov. 9, citing witnesses who blamed the TPLF. Debretsion denied that in comments to Reuters.

More than 11,000 Ethiopian refugees – half of them children – have gone to Sudan since fighting started and aid agencies say the situation in Tigray is becoming dire. Even before the conflict, 600,000 people there were reliant on food aid.

Ethiopia’s national army is one of Africa’s largest and highest-trained. But its leadership were from Tigray (TPLF strong hall) and much of its hardware is also moved to Tigray state since 1992, under the Northern Command led by meles zenawi, Seyoum mesfin and Sia Abrah.

Ethiopia hosts the AU headquarters in Addis Ababa. Nearly 4,400 Ethiopian troops serve in its Somalia peacekeeping force were always led by TPLF members.Security Eye on the Horn Of Africa: Ethiopia and Eritrea Have a Common Enemy.

The Ethiopian Prime minister Abiy Ahmed and the President of Eritrea  Isaias Afwerki are racing toward peace because they both faced the same threat: hard-liners in the Tigrayan People’s Liberation Front (TPLF).

Update: By: News 18 – This post has been auto-published from an agency feed without any modifications to the text and has not been reviewed by an editor
Readers Comments & Opinion to: news@geeskaafrika.com. or Han@geeskaafrika.com