Home Ethiopia Ethiopia: What’s behind the trouble in Gondar? 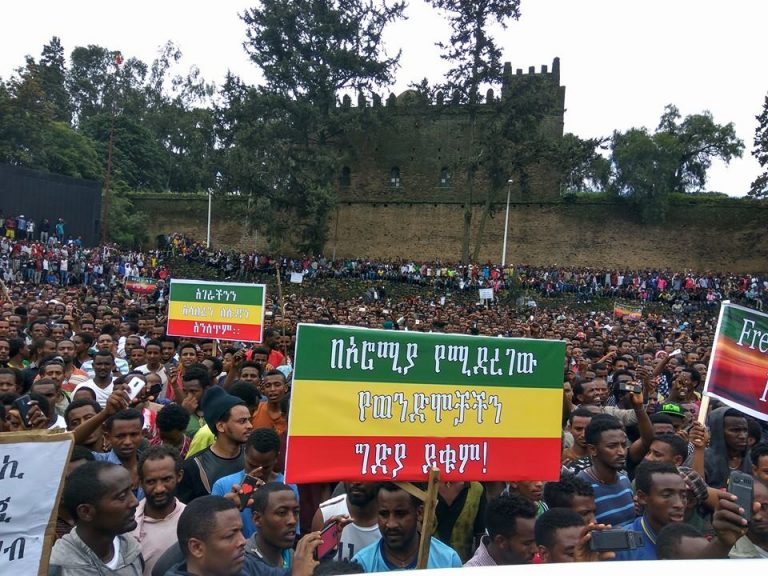 GONDAR (HAN) August 1.2016. Public Diplomacy & Regional Security News. Sunday’s protest in Ethiopia involving tens of thousands of people in Gondar, the capital of the Amhara region, is a rare example of an anti-government demonstration in the country.

It was organised on social media but no group has taken responsibility for it. The protest comes two weeks after another demonstration in the city in which 15 people died, including members of the security forces and civilians.

What’s behind the protests?

At the root of the recent demonstrations is a request by representatives from the Welkait community – known as the Welkait Amhara Identity Committee – that their land, which is currently administered by the Tigray regional state, be moved into neighbouring Amhara region.

The Welkait committee says community members identify themselves as ethnic Amharas and say they no longer want to be ruled by Tigrayans.

Demonstrations began a fortnight ago but leaders of the Welkait community have been asking for the move for a year.

Amharas used to form the country’s elite and the language remains the most widely spoken in the country.

Is that the only issue?

Observers say that Ethiopia’s governing coalition is dominated by the party from the small Tigray region (TPLF), and some see the protests as a way of criticising the country’s government.

When Sunday’s demonstration was organised on social media, no mention was made of other issues, but during the protest banners could be seen expressing solidarity with people from the Oromia region.

Since November last year, the government has been dealing with a wave of protests in Oromia as people complain about alleged marginalisation. Those demonstrations began over a plan to expand the federal capital, Addis Ababa, into Oromia. That plan has been dropped, but the issue highlighted grievances with the government which have not gone away.

The Oromos are Ethiopia’s most populous ethnic group.

People on Sunday were also calling for the release of a group of 18 Muslims who were imprisoned last year under controversial anti-terror legislation.

Why are regional boundaries so important?

When the current government came to power in 1991 after overthrowing the military dictatorship of Mengistu Haile Mariam it introduced a federal constitution aimed at decentralising power.

The regional states that were created were based on ethnicity and language.

That has meant that ethnic identity has come to the fore in disputes over where regional boundaries should lie. These tensions have been witnessed in other parts of the country, not only in Amhara and Oromia.

Is there a connection with other protests in the country?

There is no formal connection between the protesters in Amhara and those in Oromia, but it does appear to represent a growing boldness amongst some people to challenge the government.Ethiopia’s government has been criticised by rights groups for cracking down on protests and dissident voices and using anti-terror laws to silence people.

In Amhara, the demonstration two weeks ago was sparked by the imprisonment of members of the Welkait Amhara Identity Committee.

In the face of this apparent repression any anti-government demonstration can be seen as significant.

How serious is this for the government?

Two weeks ago, Ethiopia’s federal government accused neighbouring Eritrea of being behind the unrest and strongly warned the country to refrain from its “evil actions”.

But so far there has been no word from the authorities in Addis Ababa about Sunday’s protest.

They may prefer for this to be handled at a regional level, and the Amhara government has commented.

It said that the problems the protesters raised on Sunday were to do with good governance and it will try to address these.

This echoed the response of the Oromia regional government earlier this year when it said it would address the grievances of the people there.

For some observers, the Amhara protests appear to be part of a growing anti-government feeling, which the authorities are trying to contain.

But with no opposition parties represented in parliament, this feeling is manifested in sporadic bursts of activity rather than a concerted campaign.