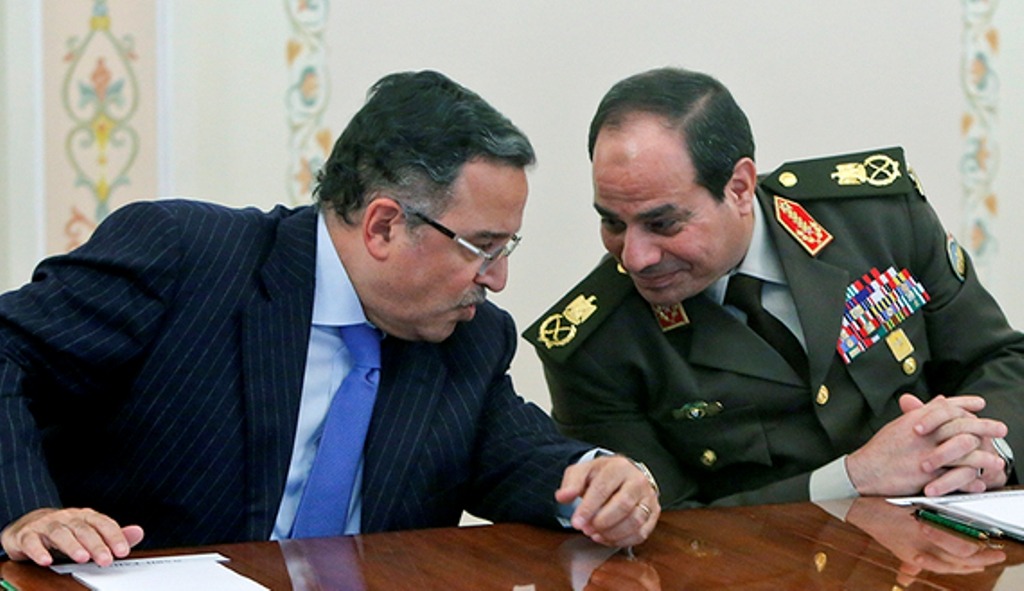 Egyptian Irrigation Minister Hossam al-Moghazi downplayed Friday the negative effects on Egypt’s water supply of the ongoing construction of Ethiopia’s Renaissance Dam, saying the first phase of construction would not cause any tangible harm to Egypt.

“The results of additional studies will appear in March 2015, six months before construction of the first phase of the dam is complete,” Egyptian Irrigation Minister Hossam al-Moghazi told reporters in Khartoum.

Egyptian Irrigation Minister Hossam al-Moghazi added his statement that the first phase of the multibillion-dollar hydroelectric dam would feature a water storage capacity of 14 billion cubic meters, which would not cause any “tangible” harm to Egypt. “This [continued construction of the dam] does not worry us,” Moghazi said.
Meanwhile: President AbdelFattah El-Sisi get presidential breifing from Water Resources Minister Hossam Moghazi and discuss the outcome of tripartite meetings on Ethiopia’s Renaissance Dam held in Khartoum, Sudan.

Minister Hossam al-Moghazi said in his breifings that a positive and constructive spirit has prevailed at the meetings with his Sudanese and Ethiopian counterparts in Sudan, Presidential Spokesman Ehab Badawi said.

Minister Hossam al-Moghazi also conveyed to El-Sisi, Ethiopian diplomatic pledge not to harm Egypt’s share of Nile water as well as invitation to Moghazi to visit the dam’s site, which was welcomed by Sisi.

Minister Hossam al-Moghazi had met his Sudanese and Ethiopian counterparts for the fourth round of talks on August 25 -26, 2014, in Khartoum.

Photo:  The Egyptian government is leaning toward adopting new policies aimed at resolving its dispute with Ethiopia concerning its Renaissance Dam project.