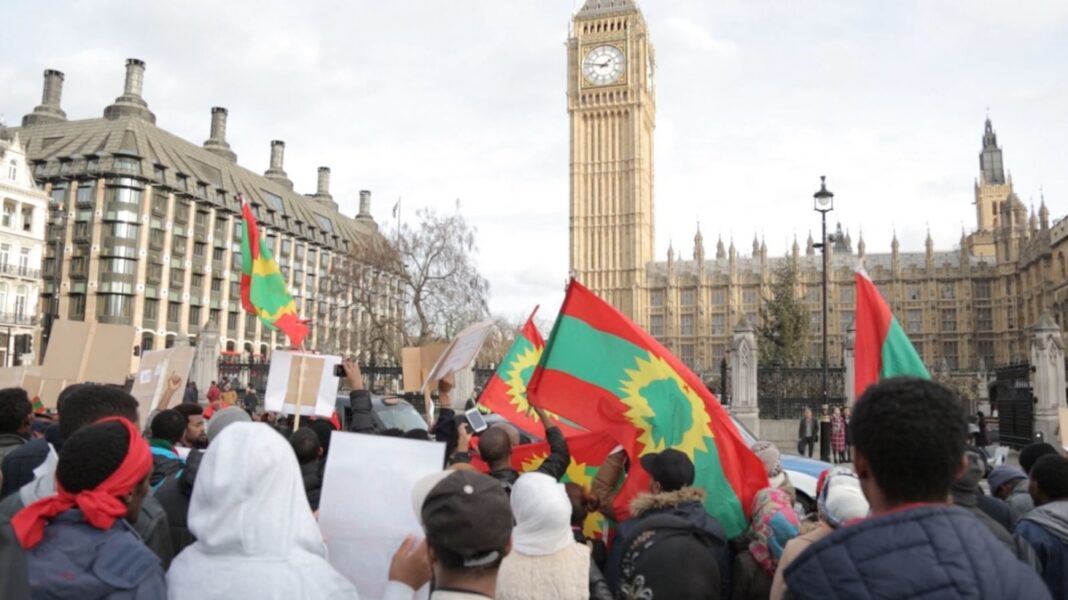 ADDIS ABABA (HAN) December 16, 2015 – Public Diplomacy and Regional Stability Initiatives News. It all began on November 12th in Ginchi, a small town some 80 Kms South West of the Capital Addis Abeba. It is a town of not more than 50, 000 inhabitants, “95% of whom are Oromos”, a nation whose ethnic makeup is known to represent more than 35% of Ethiopia’s 90 million plus diverse population.

But as far as the story of township significance (for Ethiopia) goes by, Ginichi is the last town anyone could think of. It’s a sleepy town; but it’s surrounded by serine farmlands and a breathtaking forest reserve in and around the small hills on the outskirts of the town. Most of its communities are farmers with some small time traders who run the center of the town.

That status, however, may have changed on a sunny Sunday of Nov. 12th when a group of young (and some old) residents of the town confronted a government inspecting team of not more than “half a dozen,” according to a young grocery owner in the area. Residents suspect the officials were there to push though deals to transfer a nearby field used by local youngsters as Sunday football pitch and clear a forest reserve for an upcoming investment project. Officials from the Oromiya regional state, to which Ginchi belongs to, and the central government deny any of this happening. But it was too late to stop scenes of extraordinary defiance and students-led protest that started from Ginchi and spread throughout the country for the last four weeks.

Reason? It was no longer the football pitch and the forest residents of Ginchi say they would protect at any cost; it was the Addis Abeba city hall’s ambitious (if ill-fated) plan – ‘Addis Abeba and the Surrounding Oromia Special Zone Integrated Development Plan’. Known in short the “Addis Abeba Master Plan”, federal authorities say it is merely aimed at creating an economically integrated Addis Abeba with six of its surrounding localities currently under the special administration of the Oromiya regional state.

The four weeks that since ensued have seen protests (most of them led by elementary and high school students, but also joined by University students in cities where university campuses are available) spread like bushfire. Geographically, all protests are happening throughout the Oromiya regional state, the largest of the nine states that makeup Ethiopia. Commenting on the domino effect of the small protest in Ginchi, the young grocery owner said: “never in my lifetime could I imagine this.”

It’s a statement many could agree with, but not the protestors.

Ambo was next
A university city just over 30 km before Ginchi, and 120 kms west of Addis Abeba, Ambo, a three hrs drive from Addis Abeba, is the bedrock of Oromo opposition politicians such as the renowned Prof. Merera Gudina and their constituency. Going by a recent past, similar Oromo students’ protests in April and May 2014 saw the highest death toll per city and a fierce crackdown by government security personnel that also saw the arrest of several protesting university students. Oromo activists say more than 60 protestors were gunned down during the two month 2014 protest; the government’s own account put the death toll at just 11.

The current protest at Ambo University began barely a week after the small protests in Ginchi that went largely peaceful. Students at the university were having their dinner at the compass’s cafeteria when power went off – not an unusual incident. But the week was preceded by news from Ginchi and several indications that the federal government, which temporarily put off the implementation of the Addis Abeba Master Plan in the aftermath of the April 2014 protest (and said it was doing so to ensure greater public participation), was bent on proceeding with the implementation.

Once darkness fell, students began throwing their cutlery and started chanting “Say No to the Master Plan”, a slogan recently adopted by social media activists. A few minutes later, the cafeteria was surrounded by campus police who agreed with the students that they can have their grievances peacefully staged the next morning, according to Workinesh Hinsarmu, who works at the university. But that ‘hold it until morning’ promise was not to come; the next morning the compound was heavily surrounded by not only the regional police but also the federal police forces.

“On a Monday morning at 8:30 we moved out from our dormitories to start our peaceful demonstration but about five federal police officers approached us and told us to stop. We continued shouting our slogans. By this time other group of the federal police came and took three of our friends and started kicking them violently,” remembers Gudeta, a third year student who only wanted to be mentioned by his given name. The situation escalated when hundreds of students ran to their dormitories and (“mostly federal”) police pursued after them. “They went from dormitories to dormitories and captured many of us – even those who didn’t participate in the rally.” Gudeta recounted of the violent physical assault by the police including “an order for us to stare at the blazing sun for nearly 40 minutes.”

Gudeta says many elementary and high schools in the city were already closed by the time the university students tried their chance to protest against the so called Master Plan. The university administration put up an emergency notice calling for the resumption of class as of the next morning. But the students demanded the withdrawal of the police and federal security personnel from campus. A senior administrative official told us “the police were here to stay for six months, or even a year and half if necessary,” Gudeta said.

Caught in the crossfire is Abel Tamrat, a 2nd year student who wasn’t planning to participate in the protest rally but was taken from his dorm during police’s search for those who ran away from the aborted rally. “All I wanted was to sleep in my bed, but they broke into our dorm and took me and started beating me. I tried to tell them I wasn’t a part of the protest rally, but no one was listening. Instead one of them started beating me on my face with his gun’s butt. Next thing I know I am at a hospital missing four of my front teeth.” Abel tells of a disturbing scene at the hospital, where the doctors and nurses were soaked in tears and despair to attend their patients. “We were many.”