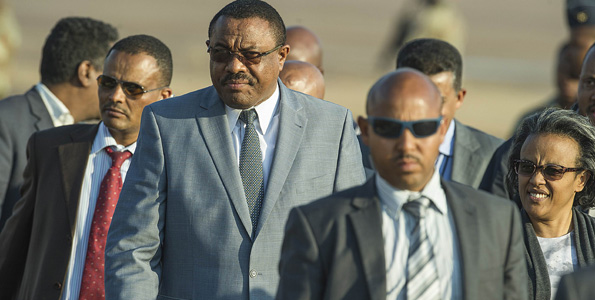 The reshuffle swapped out half of his 30-member cabinet and brought in technocrats to take over important portfolios including trade, health, water and electricity, farming and the environment.

The cabinet is one of Ethiopia’s most ethnically diverse and includes nine newcomers from the Oromiya region, the centre of protests over land grabs and political rights in which hundreds have died and foreign-owned businesses have been destroyed.

After declaring a six-month nationwide state of emergency on Oct. 9, the government said it had to broaden democracy in a country with not a single opposition deputy in its 547-member parliament.

In a speech ahead of the swearing-in ceremony, Hailemariam told lawmakers that naming a new cabinet “on the basis of competence” was at the heart of his reforms.

“An effort was made to select candidates that were best suited to deliver results. It is part of measures to address maladministration,” he said.

Hailemariam, 51, promoted former state minister of finance Abraham Tekeste to finance minister to take over from Abdulaziz Mohammed, whose stint lasted just over a year.

The finance ministry is in charge of implementing a five-year development plan unveiled last year that targets annual economic growth rates of around 11 percent, and boosting manufacturing output by up to 24 percent a year for that period.

Workineh Gebeyehu, a former transport minister, was appointed foreign minister to replace Tedros Adhanom, who is campaigning to lead the World Health Organization (WHO).

Ethiopian and foreign rights groups say at least 500 people have been killed in violence triggered by protests in the Oromiya region.

Demonstrations were initially sparked by a development scheme for the capital that opponents said would lead to land seizures in Oromiya, which surrounds Addis Ababa.

That plan was subsequently shelved, but protests then broadened to include demands for more political rights and unrest has spread to other areas, including parts of the northern Amhara province.