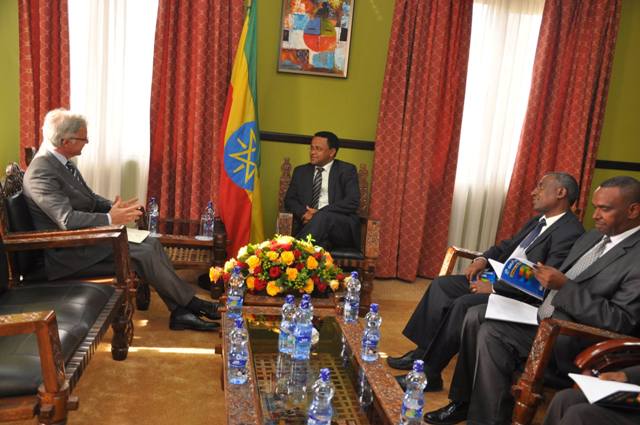 With reference to the Grand Ethiopian Renaissance Dam, Minister Yinager said that although Ethiopia was itself financing dam entirely, the work of the Italian contractor and the involvement of Italian professionals was laudable. Dr. Yinager also noted Italy’s crucial role in bringing peace and stability in Somalia, South Sudan  and  theHorn of Africa  region in its capacity as a member of the IGAD’s Partners Forum.

Ambassador Mistretta said that Africa was at an exciting stage in its development and he hoped his tenure in Addis Ababa would see further growth in investment and commerce between Ethiopia and Italy. He expressed his government’s desire to contribute to conflict resolution and stability in the region.

The Ambassador said Italy appreciated and supported Ethiopia’s indispensable involvement in the difficult negotiation process in South Sudan. Ambassador Mistretta, previously Italy’s Ambassador to Angola, emphasized that he would work to align the interests of Ethiopia and Italy.
(photo) Dr. Yinager Dessie received copies of credentials of Italy’s new Ambassador to Ethiopia.
–
HAN & Geeska Afrika Online (1985-2014), the oldest free independent Free Press in the region, brings together top journalists from across the Horn of Africa. Including Ethiopia, Somalia, Eritrea, Sudan, Djibouti, South Sudan, Uganda, Kenya, Oromo, Amhara, Somali, Afar and Harari. Plus, we have daily translations from 150 major news organizations in the Middle East and East African regions. Contact at news@geeskaafrika.com