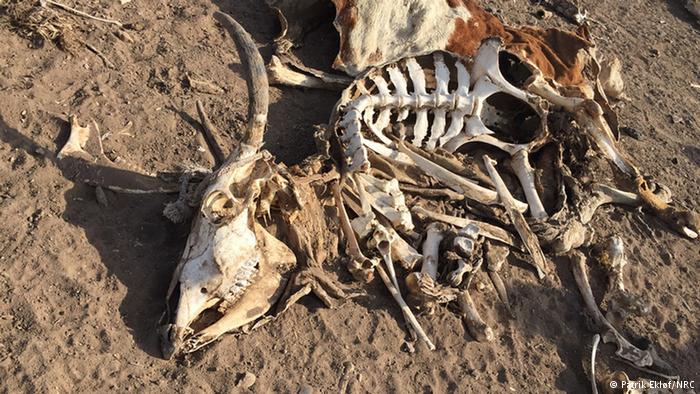 ADDIS ABABA (HAN) January 27, 2016 – Public Diplomacy and Regional Stability Initiatives News. By: Merga Yonas. The food shortage in Ethiopia is getting worse. Aid agencies say up to 15 million people could suffer because of the El Nino-induced drought. Officials fear donors are neglecting the country in favor of others.

In December 2015, the Ethiopian government appealed for 1.4 billion dollars in aid (1.3 billion euros), but officials claim that only 180 million dollars has been received so far and that over 90 percent of the aid distributed is coming from government coffers. The NGO “Save the Children” puts the international aid at “less than one third” of the requested sum, and last week stated that the humanitarian crisis in Ethiopia is “a code red emergency and it needs to be treated like one.”

“Apart from receiving, and listening to, information on [drought] from time to time, donor countries’ immediate response is very sluggish” Alemayehu Berhanu, spokesperson with Ethiopia’s Ministry of Agriculture, told DW’s Amharic service. He added that over 60 of Ethiopia’s donor partners knew of the looming crisis when the number of needy was still at 3.5 million people compared to the 10 million today – but few responded.

Mitiku Kassa, the commissioner in charge of Ethiopia’s Disaster Risk Management and Food Security Agency, sees a connection between the slow trickle of emergency funds to his country and the response by donor countries to international crises in Syria, Yemen and Iraq. With many refugees entering European countries, in particular Germany, aid budgets are being diverted. “They [the donors] probably assume that the magnitude of the hunger problem in Ethiopia is less serious”, Mitiku said in an interview with Deutsche Welle.

One of the biggest recipients of foreign aid, Ethiopia has been accused of misspending aid money in exchange for political favors, causing a furious, if short-lived, outcry from donors. Scientists say the current drought in Africa’s second most populous nation has been triggered by El Nino – a warm weather phenomenon originating from the Pacific Ocean.

New figures released by humanitarian agencies and the government of Ethiopia show that more than 2.5 million children are expected to drop out of school as a result of the drought, whereas 1.7 million children are in need of nutritional support. NGO Save the Children last week warned that 350,000 babies are expected to be born into drought-stricken communities in the coming six months.

“If emergency funding doesn’t escalate very soon, there is a real risk of reversing some key development progress made in Ethiopia over the past two decades, including the reduction of child mortality rates by two thirds, and halving the percentage of the population living below the poverty line”, Country Director John Graham said.

The looming hunger crisis in Ethiopia is also trending on social media, with critics lashing out at the government for posting double-digit growth figures when at the same time millions of people go hungry. Kennedy Tamirat wrote on DW Amharic’s Facebook page: “This [the food crisis] is the real picture of our country. This is truth. But our government officials never want to see it.”

Witnessing drought on the ground

After visiting Ethiopia’s badly-affected Eastern Somali region, the Norwegian Refugee Council (NRC) spoke of a “disaster in the making.”

Ahmednur Abdi, NRC’s Country Director told Deutsche Welle that the area had not received rainfall for two consecutive seasons. “In all my life, I have never experienced a worse drought,” a 90 year-old woman in Sitti, a zone in the Somali region of Ethiopia, told the NRC team. Other residents recalled memories of the 1984 drought that left two million people dead.

“It is crucial that the drought-affected communities in Ethiopia are provided with timely assistance,” said Geir Olav Lisle, NRC’s Deputy Secretary General. “We cannot risk that the drought in Ethiopia is overshadowed by the Syria crisis and other ongoing emergencies,” he added. “The outlook for 2016 is very grim,” according to the Rome-based UN Food and Agriculture Organisation (FAO). “Food overall will become harder to access if we continue to see prices rise, food stocks deplete and livestock become weaker, less productive, and perish.” it said.

Ethiopians now await the arrival of the rainy season in March – if it arrives at all.