Home Djibouti Ethiopia and Djibouti are “surfing in the same boat” 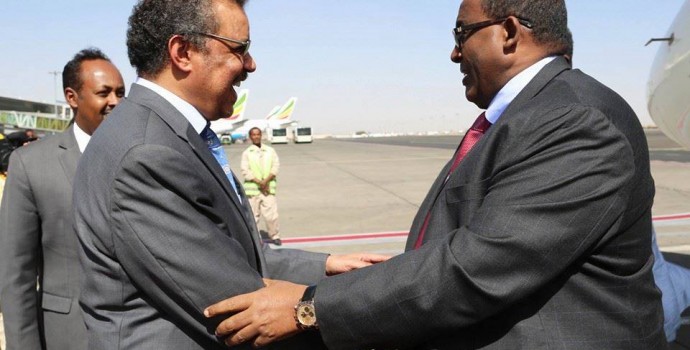 In his opening remarks at the Ministerial segments of the meeting, held at Sheraton Hotels in Addis Ababa,  Dr. Tedros emphasized the long and strong brotherly relations between Ethiopia and Djibouti and the shared insight the countries ushered towards realizing economic integration in the region.

Touching upon the special relationship between the two brotherly countries, Foreign Minister Dr. Tedros stressed Ethiopia and Djibouti are not only neighboring countries, but also countries who share strong political, economic and cultural bonds.

He further said Ethiopia and Djibouti are moving together, hand in hand, towards the same common destiny. In such score, the Minister said, “Our current cooperation is the best witness that we can surmount any bilateral or regional challenges together. Our two governments have frequently consulted and coordinated positions on matters of regional, continental and international importance.”

Ever since the 13th Joint Ministerial Commission and the first High Level Joint Commission Meetings in February 2015, Dr. Tedros said a number of results have been achieved in the areas of political, diplomatic, economic and social spheres.

He maintained that the two countries are taking the lead in infrastructural interconnection which he said is exemplary to the rest of IGAD member countries.

Some of the joint mega projects he said included the nearly completed Sebeta-Doralleh Standard Gauge Railway Project the mega gas project, worth 4 billion investment, the Oil Pipe Line Project from Djibouti to Awash which will commence soon, and the soon to be completed potable water supply project for the City of Djibouti and the construction of Tadjourah -Woldia-Mekele Standard Gauge Railway and road projects which are showing encouraging progresses.

In all these, the Minister said the benefits of these mega projects to the peoples of both countries are very clear and tangible, adding that this will further simplify all forms of cross-border transportation and will provide mutual benefits and serve as the strong foundation for our economic integration.

The 14th Ethio-Djibouti Joint Ministerial Commission meeting concluded later on Wednesday in the presence of Ethiopian Foreign Minister Dr. Tedros Adhanom, and Mr Mahmud Ali Yousuf, the Foreign Minister of the Republic of Djibouti, ministers, high-level government officials, and ambassadors as well as senior experts from both countries.

The two sides have also concluded the signing of an agreed upon minute on Political, Security and Social; Economic and Commercial; and Port and Transport Sector Clusters.