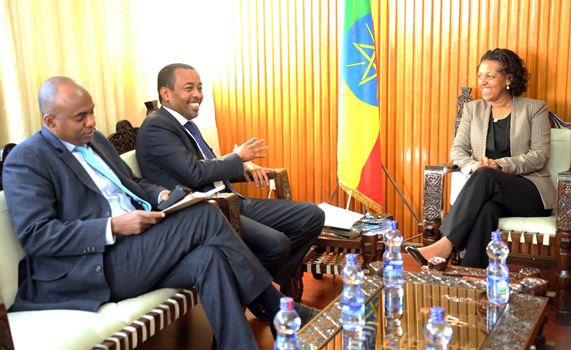 The discussions focused on further strengthening the exemplary and multi-range of bilateral ties and solidifying the already existing regional and global cooperation.

State Minister Hirut underlined that Ethiopia and Djibouti have had exemplary ties in wide range of areas including on infrastructure, trade, people-to-people ties as well as in terms of the number of joint commissions established between the two countries.

The State Minister said the two countries are also working closely on outstanding/pending issues to further advance their cooperation further noting that Ethiopia and Djibouti have already created positive vibe for other African countries with their newly-inaugurated railway.

She also praised the cooperation in the education sector, adding that this would further enhance the people-to-people ties between the two countries.

Ambassador Mohamed Idriss Farah on his part said Djibouti and Ethiopia have excellent relations in all aspects. He said the two countries are also working closely in the economic, social and political frontiers for mutual growth and prosperity of their people. Ethiopia and Djibouti will continue to cooperate on global stages, he added.