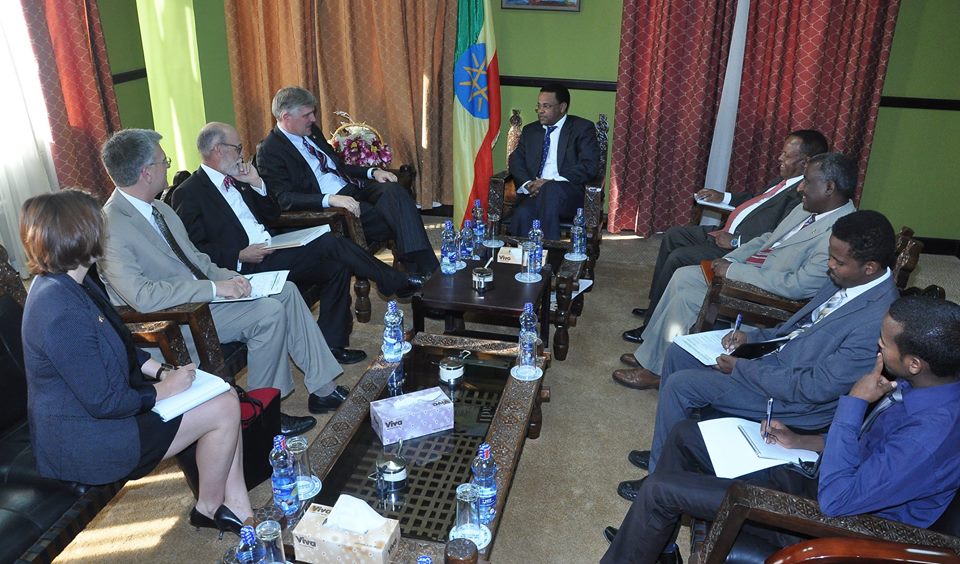 Addis Ababa (HAN) February 9, 2015 – Public Diplomacy and Regional Financial security news. Ethiopian State Minister of Foreign Affairs, Dr Yinager Dessie met with Mr. Malcom Brown, Deputy Minister of Canada for International Cooperation. The two Minister’s discussion dwelt on bilateral and regional maters of mutual interest.
On the occasion Dr. Yinager Dessie noted that Ethiopia and Canada are commemorating 50 years of friendship this year with great satisfaction and immense optimism of a bright future ahead. He said the longstanding relationship of Ethiopia and Canada is underlined by a warm feeling of friendship by the people and Government of Ethiopia towards Canada. Doctor Yinager briefed Mr. Malcom Brown about the rapid and inclusive growth of the Ethiopian economy which registered double–digit economic growth for the past 10 years. Speaking about growing economic ties between the two countries, he appreciated the Government of Canada, the Canadian embassy in Ethiopia, Canadian Council for Africa for working closely with the Ethiopian Ministry of Foreign affairs of Ethiopia by implementing the follow up action plan which is the outcome of the Canada Africa business summit held from September 15-18, 2014 in Toronto.

He extended his appreciation and gratitude to the contribution made by the Canadian Government in the areas of food security, health and good governance while also hailing the selection of Ethiopia as Canada’s country of focus for cooperation through Canadian International Development Agency (CIDA). He also expressed Ethiopia’s keenness to learn from Canada’s experience in hydropower development, construction technology health and generally enhancing cooperation on economy. Dr. Yinager briefed Ethiopia’s role in bringing peace and stability in the region and current political and security situation in Somalia and South Sudan.

Mr. Malcom Brown, Deputy Minister for International Development of Canada, acknowledged the overall progress Ethiopia made in achieving development. Discussing the upcoming national election, he hailed the active and wide participation of the public in voter registration and expressed his hopes all actors would work towards ensuring free and fair election. Dr. Yinager affirmed the Ethiopian Government’s readiness to ensure that the election is conducted in peaceful, free and fair manner reflecting the will of the people. He also pledged that Canada will further enhance the Ethio- Canada and Canada- Africa cooperation in all sectors. He went on to note that Canada’s desire to engage in mining sector In Ethiopia and share its vast experience in hydroelectric power generation. Mr. Malcom Brown lauded Ethiopia’s effort in bringing peace and stability in the region and reiterated Canada’s desire to work with with Ethiopia in peace and security issues.

The two sides exchanged views in the great contributions made by the Government of Canada to Ethiopia and other African countries in development assistance at all levels. They also discussed the ongoing activities in upgrading the cooperation between the two countries from the developmental cooperation to a more robust economic cooperation. The two sides pledged to continue engaging in extensive activities that broaden and deepen the bilateral relation.