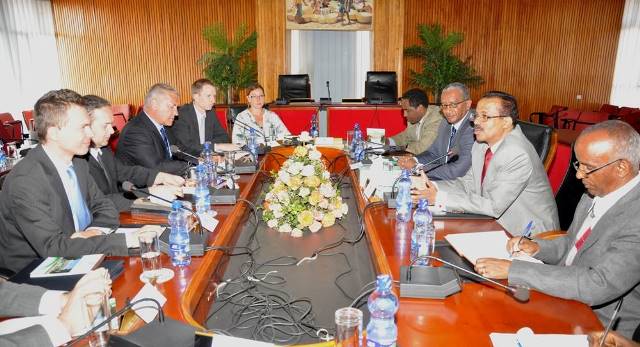 Djibouti (HAN) nApril 25, 2015 – According to the ENA, Ambassador Berhane Gebre-Kristos, State Minister for Foreign Affairs, on Friday (April 25), held talks with a Parliamentarian Delegation from the Czech Republic.

Ambassador Berhane praised the long and historic relationship between the two countries and said their continuing dialogue on bilateral, regional and global issues was a testament to their strong cooperation.

Ambassador Berhane explained the Government’s policy of prioritizing poverty reduction and improving agricultural productivity in order to transform the country into a manufacturing based economy. It was, he

underlined, committed to effectively and efficiently use all available resources including those generated through development cooperation. The State Minister explained to the delegation that Ethiopia’s transformation was

not limited to economic growth. It had been equally successful in ensuring public participation and decentralization of decision making powers. Mr. Michal Kaplan, the Director of the Czech Development Agency, noted that

Ethiopia was certainly undergoing an impressive transition in a wide level, and said the Czech Government remained committed to deepen its development cooperation with Ethiopia. Mr. Kaplan said that his Agency was

working in the health, education, water, agriculture and sanitary sectors and that Ethiopia was one of the top three priority countries for the Czech Government’s development cooperation program.

Ambassador Berhane said Ethiopia was committed to the strengthening of its relationship with the Czech Republic and to expand the areas of cooperation. He said that the forthcoming visit of the Prime Minister of the Czech

Republic to Ethiopia at the invitation of Prime Minister Hailemariam would lend momentum to their growing cooperation. The Czech Parliament Delegation, which has been visiting the country for the past ten days, is

expected to meet other government officials.

One of Geeska Afrika online reader said, the way to communicate with developed countries are essential to our development.