Home Eritrea Eritrea’s response to the extension of the Sanction 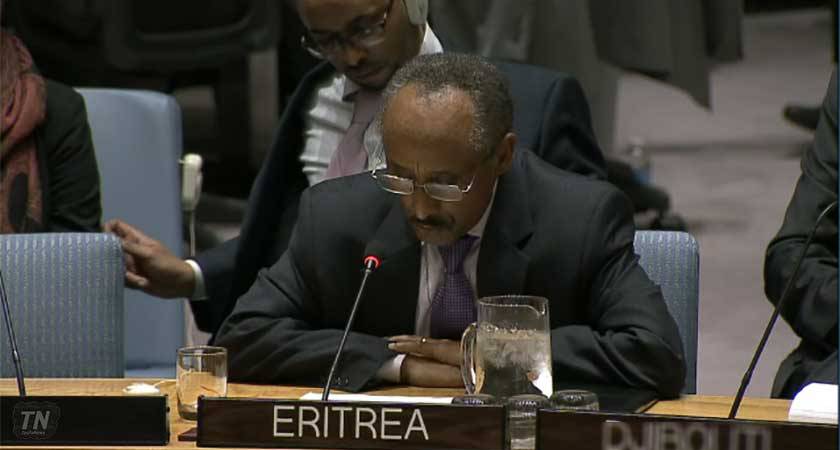 Share on Facebook
Tweet on Twitter
NEW YORK (HAN) November 14.2016. Public Diplomacy & Regional Security News. BY: MR. AMANUEL GIORGIO. CHARGÉ D’AFFAIRES. I would like to thank you, Mr. President, for giving my delegation the opportunity to address the Council. Allow me also to congratulate Senegal for assuming the Presidency of the Council for the month of November.
Mr. President,
Excellencies,
The UN Security Council has once again committed grave injustice against the people of Eritrea by extending the unjustified sanction.
There is no reason to maintain sanction against Eritrea, as the justification for its imposition has long been proven nonexistent, a fact that has been asserted by the Somalia Eritrea Monitoring Group. In four of its reports, including during its present mandate the Somalia Eritrea Monitoring Group, has affirmed that “there is no evidence of Eritrean support to Al-Shabab in Somalia.”
On Djibouti, Eritrea remains committed to the mediation of the State of Qatar, which resulted in the release of all Djiboutian prisoners of war last March. The report of the Somalia Eritrea Monitoring Group makes it clear that all its interlocutors only mention seven prisoners of war in Eritrea, who are all accounted for. For its part, Eritrea has confirmed that there are no more Djiboutian prisoners in its hand.
In light of the reports of the Somalia Eritrea Monitoring Group and serious regional developments, it is incumbent on the UN Security Council to lift the unfair, unjust and counterproductive sanction on Eritrea without further delay.
Mr. President,
Eritrea is keenly aware that failing to find any substantive argument to continue the sanction, some members of the Council have resorted to procedural matters, particularly the inability of the Somalia Eritrea Monitoring Group to visit Eritrea. If truth be told, this is not the real reason for their determination to keep the sanction in place. In fact, some of them have made it clear that even if the Group were to visit Eritrea, they would still not support the lifting of the sanction.
Mr. President,
The sanction, which has been in place for the past seven years, has been detrimental not only to Eritrea, but also to the Horn of Africa region. It has encouraged zero-sum approaches and imparted a sense of impunity to some countries and emboldened them to violate international law as well as externalize their problems instead of cooperating with their neighbors to address the serious challenges of regional peace and security. Unfortunately, the UN Security Council has once again missed the opportunity to contribute positively to regional peace, stability and amity by maintaining the sanction on Eritrea. On its part, Eritrea will continue making its positive contribution to regional peace, stability and security in the Horn of Africa and the Red Sea.
In conclusion, Eritrea wishes to sincerely thank those delegations who have advocated for the immediate lifting of the sanction and those who have dissociated themselves from this unfair and unwarranted resolution.
I thank you, Mr. President