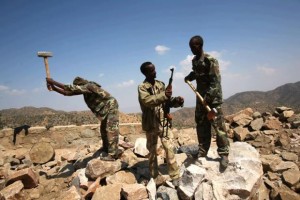 In effect, Eritrea is not prepared to stop forcing its youth into lengthy stretches of work as soldiers and civil servants, a conscription policy that is driving waves of refugees to leave the country to escape from compulsory National Service for an unlimited-period. Each month as many as 5,000 people flee Eritrea, according to U.N. figures.

Legally, all Eritrean citizens, male and female, between the ages of 18 and 40, must complete 18 months of service to the state. But those who flee from the country say that this National Service can stretch to 15 years and even more. The government reserves the right to extend the length of service for any citizen without limit. Officially, compulsory military service does not extend beyond the age of 50, but one man was still in compulsory National Service at the age of 68. Eritreans in National Service receive military training for 6 months, and some may supposedly move into other government employment, including the civil service. At the end of active military service, citizens are supposed to have the right to return to their previous employment, but many are forced into government employment, only to become what might be termed “slave labourers” in construction and other industries, with no rights or freedom to leave this employment. During this period, the conscript is paid a wage, which is roughly equivalent to10 US Dollars per month.

The Universal Declaration of Human Rights declares that everyone has the right to work and to free choice of employment in just and favourable conditions”, and the “right to just and favourable remuneration.” There is clearly no free choice of employment for anyone subjected to Eritrean National Service, notably when it ends and he or she is drafted into labour not of their choice, for which he or she is paid a pittance. The Universal Declaration of Human Rights also declares that “Everyone has the right to freedom of movement within the borders of each state”, and the “right to leave his own country” to “seek and enjoy in other countries asylum from persecution.” There is a ‘shoot-to-kill’ policy, and no one who is involved in Eritrean National Service enjoys these rights to movement or to seek refuge elsewhere from an unjust regime.

The United Nations Human Rights Council appointed a Special Rapporteur to review human rights in Eritrea. In her 2014 report. she stated that the numbers of National service evaders or escapees and those suspected of wanting to flee or caught during flight…. may reach tens of thousands. ”Such persons are invariably arrested and detained. Detainees are held without being informed about the reason for their arrest and without an arrest warrant”. (sections 51 and 52). Eritrea justifies its retention of national service and harsh treatment of refugees and absconders from the military by citing continuing hostilities with Ethiopia.

But the Rapporteur declared, “Eritrea cannot use border disputes as an excuse to continue to violate its human rights obligation…the state obligation to respect, protect and fulfil human rights domestically is not dependent on external factors….The open-ended nature of national service is depriving the women and men of Eritrea of their most productive years, forcing them to cross borders to take their destiny into their own hands”. (sections 95 & 96)

In response to the Universal Periodic Review (UPR) of Eritrea’s Human Rights in 2014, the government of Eritrea rejected recommendations to end enforced and indefinite-term military service, but stated that it had begun its demobilization programme in 2002. There is absolutely no evidence of any such demobilization. In the same UPR, the Government of Eritrea also rejected recommendations concerning conscription and abuse of child soldiers, stating that there is no under-age recruitment in Eritrea’s military. But students aged 16 and more are recruited every year into the Sawa Military Academy, starting their military training before they have become adults.

The Eritrean Government must listen to the international community and experts appointed by the United Nations and end the whole process of compulsory and indefinite National Military Service, putting a strict enforceable limit of not more than 18 months to the term of compulsory National Service; and Eritrea must offer non-military options for such Service. The Eritrean government must be told that conscripts are not slaves and they should not be held against their will in the military. No one must be arrested, imprisoned, or punished or shot for attempting to leave the military to lead a life of his/her choice, which is an inalienable right guaranteed under international law.