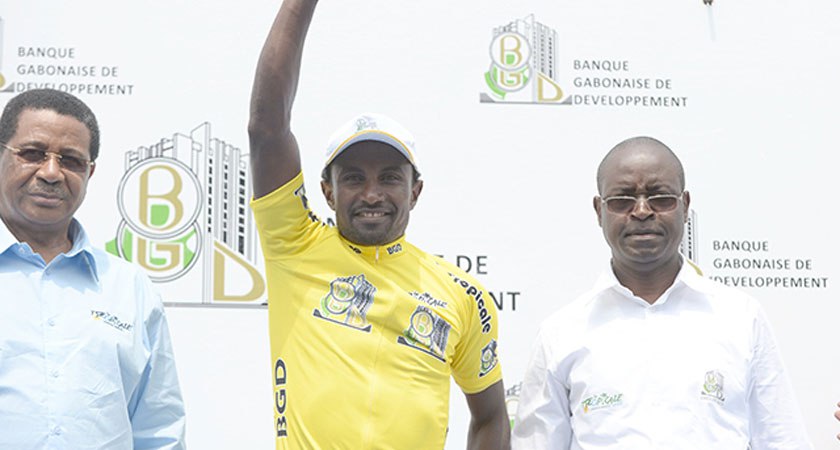 Nairobi (HAN) March 1, 2016 –Geeska Sports. By: Pierre Carrey Five hours earlier, the finisseur claimed the gold medal of the Continental Championships, outsprinting two professionals of Team Dimension Data, Algeria’s Youcef Reguigui and fellow Eritrean Mekseb Debesay. He had a clean two-meter gap on the finish line in Benslimane, Morocco. With five men in the top 10, his national team crushed the 180km race and overcame some echelons opened by Moroccans.

Tesfom Okubamariam, 24, already had great presence last month at the Tropicale Amissa Bongo, Gabon, when he became the first African amateur to take the yellow jersey – he finally finished fourth after the crucial time trial. His international palmarès starts even earlier, in 2012, with a stage win and a king of mountains title at the Tour of Algeria.

“I had some bad luck in my career,” Okubamariam told Cyclingnews Friday night in his hotel in Casablanca.

His story is mainly a matter of luck indeed, or more exactly, a matter of door. It opened on the right time for Daniel Teklehaimanot, the Eritrean pioneer, who moved in 2009 to the World Cycling Centre (WCC) in Switzerland, paving the way to a professional cycling career in Europe. Natnael Berhane and Merhawi Kudus, two stars of Eritrean cycling, followed the same path. But four years later the doors to the “Old Continent” stand closed for Okubamariam.

“I had an invitation to join the World Cycling Centre in 2013 but I couldn’t go because the Swiss government was refusing to deliver visa to Eritreans at that time,” he says with a relaxed voice and no specific complaint.

Instead, this rouleur-sprinter went to the WCC’s satellite in South Africa in 2014 and 2015, as it was easier to travel across the continent. The centre, based in Potchefstroom, near Johannesburg, has helped more than 400 cyclists to develop in the past 10 years but all the latest need European experience then to improve further and gain exposure.

Tesfom Okubamariam has only raced twice in Europe, at the 2012 Tour de l’Avenir won by Warren Barguil (“It was really too cold, there was snow one day”) and the World Championships in Copenhagen the year before (“It was very fast and long, I learned a lot from this race”). But he never had a full season in France or Italy to show himself.

Today, when he is not racing with his national team, Okubamariam is staying in Asmara, the Eritrean capital, with Zoba Debub, his club from his cycling beginning in 2008, when he was a teammate of Teklehaimanot.

The icon of African cycling is Okubamariam’s best friend and shares his house when he is back to his country.

“Daniel helps me a lot,” the new African Champion says. “Everything I ask he does it for me. I try to do everything like him. For instance he sends me his training program from Dimension Data and I try to do the same at home.”

“If I ride my bike for seven hours he also will do seven hours exactly,” Teklehaimanot says.

So why is Okubamariam still not in the picture of a foreign pro team? Teklehaimanot believes this is a matter of age too. “Tesfom is now 24 and many teams think they only need riders under 22. It’s a real shame.”

Friday night both friends split. The pro rider went to Casablanca airport to fly to Italy and prepare for Paris-Nice. The amateur cyclist went back to his hotel room and will travel back to Eritrea on Saturday after a 14 hour journey.

They will be on the same plane one day. “I stopped thinking too much about turning pro,” Okubamariam says. “I am now concentrating on the Tour of Algeria with the national team and the Tour of Eritrea, because cycling is my life, my job, my mission.”