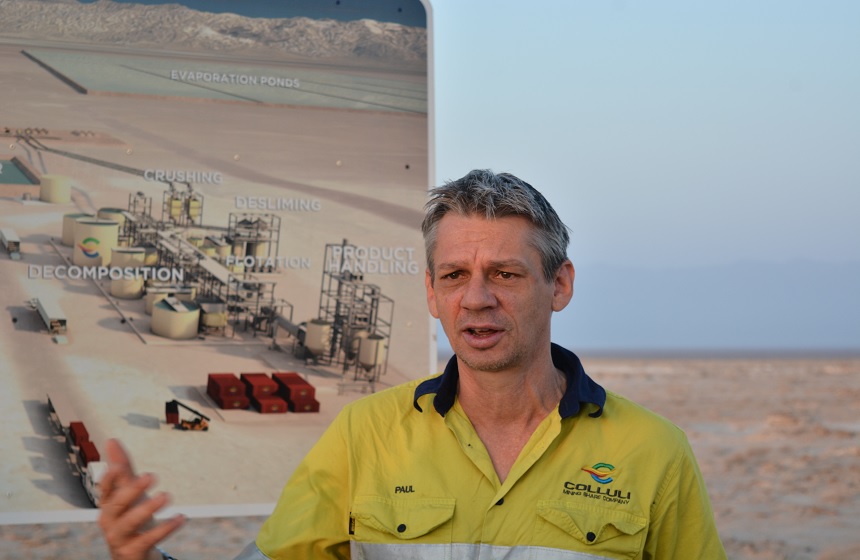 The project received social and environmental approval in December, and globally recognised engineering and construction firm Fluor has been appointed to lead the front end engineering design (FEED) and optimisation process.

The approvals process for the mining agreement and mining licence are extremely well progressed.

The key to the appealing project is the unrivalled, non-brine Colluli resource. It offers huge scope: it contains a shallow, 1.1 billion tonne ore reserve comprising over 200 million tonnes of sulphate of potash (SOP), a 347 million tonne high quality rock salt resource, and an 80 million tonne magnesium sulphate resource. In addition, the resource contains appreciable amounts of magnesium chloride and gypsum and based on the DFS for SOP production, has a projected mine life greater than 200 years.

The project is being developed through the Colluli Mining Share Company, a 50:50 joint venture with experienced state-owned Eritrean National Mining Corporation (ENAMCO) and the pair are taking firm steps towards first production.

Danakali managing director and CEO Paul Donaldson says that Colluli is one of the world’s most advanced greenfield SOP developments.

He refers to it as “positively unique” for its outstanding attributes and economics, including industry-leading capital intensity, bottom quartile operating costs, exceptional suite of potassium bearing salts for high yield, production of SOP, close proximity to the coast and unrivalled product diversification potential.

The US$300 million phase one development (pictured, left) has an anticipated post-tax IRR of 25.4% and a capital payback period of 3.5 years, however the appointment of Fluor is expected to further optimise the development.

Donaldson said Fluor brought valuable experience, a commitment to ethical standards and importantly for the project’s development, capability in assisting with finance arrangements.

“The combination of their values, people, reputation, optimisation approach, mining and metals experience, African experience and potash-specific experience, will benefit the project significantly as it progresses towards construction,” Donaldson said.

“They’ve got excellent credentials and an excellent track record of delivery under a fixed or lump sum EPC (engineering, procurement, construction) arrangement.”

The Colluli resource can produce SOP, SOP-Magnesia (SOP-M), muriate of potash (MOP), and has appreciable amounts of gypsum, kieserite and magnesium chloride, however Danakali has focused its initial efforts on the top-priced SOP product.

Some 800,000 tonnes of per annum of SOP and 200,000tpa of SOP-M are now covered by off-take MOUs and with the recent appointment of marketing manager Danny Goeman, agreements are firming up.

“He has made good progress on the marketing side, we have got a number of credible offtake counterparties to progress our offtake discussions,” Donaldson said.

“We’re working through non-binding Heads of Agreements now and that will ultimately take us to binding contracts.”

There is a simple demand structure for Colluli’s fertiliser products – the world’s growing population is expected to increase 30% by 2050 and require a 70% increase in agricultural yield.

The project itself is in a prime position to help feed a growing population – Africa is forecast to account for a quarter of the world’s population by 2050.

Colluli’s solid form potassium salts will yield 25 times more potassium in ore feed than brine-based resources and Donaldson said SOP’s fundamentals were much better than those for the more common form of potash, potassium chloride.

“Firstly, that’s because SOP is a multi-nutrient fertiliser, it’s got sulphur in it as well which helps with plant nutrition,” he said.

“Secondly, SOP is favoured for higher value crops – like fruits, nuts, vegetables, coffees – so as disposable incomes improve throughout the world, people will switch to those types of foods away from the basic staples like cereals which potassium chloride is mostly used for.

“Thirdly there’s the climate factor: sulphate of potash is used in arid areas as well as areas that need chloride-free fertilisers, because you need water to wash away chlorides from the roots, so SOP is a better fertiliser type when you’re focusing on water efficiency.

“We think the fundamentals are a lot stronger for SOP going forward and this is the most advanced pre-production facility for sulphate of potash globally, so we’re in a very good position.”

The pragmatic team at Danakali has been prepared to adapt, which has seen it not just survive several tough years in the equities markets but emerge with a strong balance sheet (A$11/US$8 million in the bank), strong backers including JP Morgan and a project with an in-demand product moving rapidly towards construction.

“Originally Colluli was a potassium chloride project but we saw the market turn years ago,” Donaldson said.

“We’re adaptive – we were able to play to the resource’s strengths, approach it with a different set of eyes and make the project fundable for a junior mining company.”

Danakali is ticking off milestones to development

An investor roadshow in London, the social and environmental tick and Fluor’s appointment saw the share price rise 23% in six weeks from December 1 and Donaldson awaits further upside.

“The significance of the pending mining agreement is that it gives the Colluli Mining Share Company exclusivity over the 1.3 billion tonne resource, and that is pretty much the point we move out of the exploration phase into the construction and mining phase,” Donaldson said.

Donaldson (left) said there were several reasons for the company continuing to gain traction as it moved the project forward.

“We’ve always maintained that our joint venture relationship with ENAMCO is an enabler and it’s helped us reach this point,” he said.

ENAMCO has a joint venture with Canada’s Nevsun Resources (CN:NSU) which is operating the country’s Bisha copper-zinc mine, and is also a joint venture partner in the Zara gold mine and the Asmara project. The country has built, and continues to build, a successful record for mining developments.

Danakali has been operating in Eritrea since 2009 and has found it to be a safe, stable and development-focused jurisdiction, Donaldson noted.

The view is supported by JP Morgan’s substantial recent investment in Danakali, the UK investment bank having also backed the Bisha project.

Donaldson said the Danakali team had strong operational experience and prided itself on its pragmatic and considered approach to Colluli.

He said the team used an over-arching theme of simplicity as it went about project development and always engaged credible industry consultants.

“For a company of our size, you’ve got to have the right people,” he said.

A company also has to have the right project and Donaldson describes Colluli as the world’s premier potash opportunity thanks to its unrivalled resource, economics and diversification potential.

“There is only one Colluli,” he said.