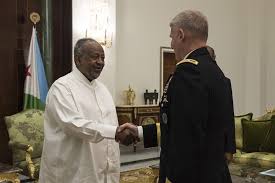 Djibouti (HAN) 27 April, 2017 – Public Diplomacy & Regional Stability, By. Samuel Getachew (The Reporter).  A couple of weeks ago, the Donald Trump administration announced that it has changed combat rules in Somalia; however, General Thomas D. Waldhauser, Commander of US Africa Command (AFRICOM), is calling their involvement as “logisticians.”

“This is part of a routine deployment that has been really in the works for quite some time”, he said.

He made the statement at an international telephonic press briefing, hosted at American missions and embassies, and was described as the “first ever African Chiefs of Defense Conference”.

Commander of the African Union Mission in Somalia (AMISOM) from Stuttgart, Germany jointed the one-hour conversation with journalists from around the world on April 20, 2017.

As far as the new engagement of Somalia is concerned, Ambassador Francisco Madeira, of Mozambique, Special Representative for Somalia and Head of the AU Mission in Somalia (AMISOM) said: “Somalia is for the Somalis…We, like all other Africans, we have our own countries. We are in solidarity with the Somali people; we need to support Somali people. We have interests to have a stable Somalia.”

“We need to first help to degrade and contain Al-Shabaab, to bring levels of violence to levels that are acceptable that can allow for the government as such to be present and exercise its functions all throughout the country”, he said.