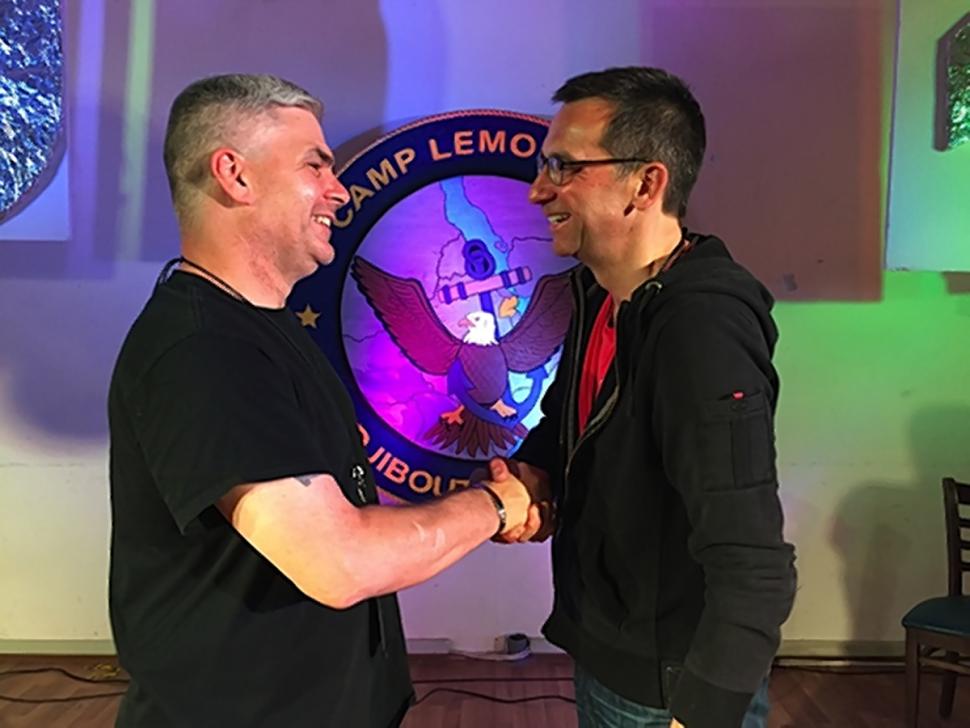 Djibouti (HAN) January 11, 2015 – Public diplomacy and Regional Security and safety news. With so many fires burning throughout the world, it’s good to know FDNY smoke-eaters are literally everywhere.

Kaganis hails from the Bronx and Manhattan’s Engine 35/ Ladder/Battalion 12 at 124th St. and Third Ave. But for the next year, he’ll be away from his family because he’s serving at the Joint Operations center at Camp Lemonnier. That’s a military base in the same neck of the woods as Eritrea, Somalia and Yemen.

It’s a tough neighborhood. On any given day, there’s probably more shooting going on there than in East New York. But that hasn’t stopped Kaganis or the thousands of other troops who put their lives on the line every day to keep us safe back home.

Better known as a weatherman and anchorman and reporter, Price has done standup since he was in college. Working with an organization called Stars for Stripes, Price performed with members of L.A.’s Groundlings improv comedy group to entertain troops deployed overseas. This was Price’s 10th tour of duty doing jokes for heroes.

“I’ve been everywhere from Iraq to Afghanistan to Kuwait, and now Africa,” Price says. “They (Stars for Stripes) take celebrities and bring us not only to large bases, but to the smallest of forward operating bases as well — in the most remote locations, where typically entertainment is very hard to come by.”

When he’s not performing comedy, Price — who has anchored Fox 5’s morning show, “Good Day New York” — says he’s also creating his own content these days.
Thanks to classic series like “M*A*S*H” and even “Hogan’s Heroes” we know that it’s possible to make war and famine funny, even poignant.

But there’s been almost nothing but outrage in parts of Ireland over a new comedy called “Hungry.” The show was commissioned by U.K. broadcaster Ch. 4 and will be set during the Irish potato famine. That tragedy cost around a million lives from 1846 to 1851.

Like other Ch. 4 programming — such as Ricky Gervais’ comedy “Derek” — “Hungry” is expected eventually to make it to the U.S. But it’s possible the show will never even see the light of day on the Emerald Isle.

Dublin politician David McGuinness has slammed the show and claims it is intended to “embarrass and denigrate” one of the most painful periods in Irish history.

McGuinness has called on Irish broadcasters to shun the project. But the creator of “Hungry,” Dublin native Hugh Travers, insists the famine makes a great backdrop for the show because, as he puts it: “They say ‘comedy equals tragedy plus time.’ I don’t want to do anything that denies the suffering that people went through, but Ireland has always been good at black humor.”