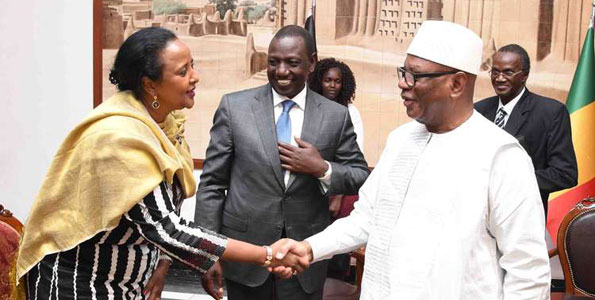 BY: FRED OLUOCH. Kenya’s candidate for the chair of the African Union Commission, Amina Mohamed, must get support from West Africa to be assured of a win.

Although her supporters were confident that, with the East African Community, the Common Market for Eastern and Southern Africa (Comesa) and other countries supporting her, she has secured at least half the votes, they recognise that the Economic Community of West African States (Ecowas), the largest bloc with 16 votes, remains her greatest hurdle.

The campaign has taken her to Nigeria, Mozambique, Senegal, Angola, Sahrawi Arab Republic and Chad.

However, Ms Mohamed is yet to get the support of Senegal, Ghana, Guinea-Bissau, Liberia, Mali and Ivory Coast. She is currently reaching out to Portuguese-speaking Angola, Mozambique and Sao Tome.

The other challenge is the competition between Francophone and Anglophone countries, which are equally matched at the AU, and the Southern African Development Community (SADC), which is represented by Botswana’s Foreign Affairs Minister Pelonomi Venson-Moitoi.

SADC members say that outgoing chair Nkosazana Dlamini-Zuma could have stayed on for a second four-year term, but since she opted out prematurely, the bloc should retain the seat. Ms Venson-Moitoi has the support of SADC countries, although Ms Mohammed has been wooing South Africa.

Ecowas is behind the Senegalese candidate, 69-year-old veteran diplomat Abdoulaye Bathily. President Sall reportedly intervened on his behalf to delay the elections in July in Kigali so that Prof Bathily could participate.

Agapito Mba Mokuy of Equatorial Guinea, 51, has the full support of his president, Obiang Nguema, who is using oil resources to lobby other African heads of state. Mr Mokuy can speak six international languages and has extensive experience.

Moussa Faki Mahamat, the foreign minister of Chad, is getting support from President Idriss Deby, the current AU chairperson.

The candidate who wins must garner support from two-thirds of the 55 member states, or 37 votes.

In the elections held in July in Kigali, Ms Venson-Moitoi, former Ugandan vice-president Specioza Kazibwe and Mr Mokuy failed to meet the two-thirds threshold. Ecowas members, led by Senegal, influenced 28 members to boycott the voting on grounds that none of them had the pedigree to lead the continental body.

Ms Moitoi and Mr Mokuy are still in the race. Diplomatic sources from Addis Ababa say that Ms Mohamed could win in the second round after rigorous lobbying.

Because all the candidates are strong, there is not likely to be an outright winner in the first round.