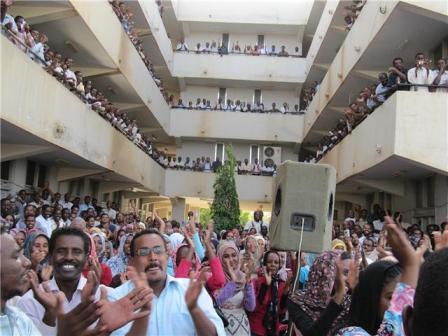 On 6 October, Sudanese doctors staged a strike and refused non-emergency treatments to patients to protest the poor working conditions, lack of medicines and protection of doctors after increasing attacks on medical staff by frustrated patients and their families.

On 13 October, the CCED called off the strike following government pledges to introduce a bill to the parliament to protect doctors, improve training conditions for registrars and improve work environment in hospitals.

However, the CCSD last Tuesday announced resumption of a two-day strike every week during November, saying the government didn’t honour its commitments.

This time National Intelligence and Security Service (NISS) has detained and summoned dozens of the striking doctors.

In statement to media, Amnesty International pointed that the whereabouts of ten medical doctors remain unknown after being arrested by the Sudanese National Intelligence Service (NISS) between 30 October and 6 November.

“The detained doctors are at risk of torture and other ill-treatment. The ten were part of a group of 29 doctors arrested then released without charge on 29 October,” stressed the statement.

Amnesty international statement further pointed that the doctors were questioned by NISS for several hours about their role and activities in relation to the strike and about their political affiliations.

“The other 19 doctors who were released on 29 October are required to report every day to the NISS offices from 8am to 10pm,” added the statement.

Amnesty International has further called on the Sudanese authorities to immediately disclose the whereabouts of the detained doctors; release them immediately unless they are promptly charged with a recognizable criminal offence and to ensure that the ten doctors are granted regular access to their family and medical treatment.

Earlier CCSD pointed that NISS has summoned 42 doctors across Sudan.

In a related development the Sudanese presidency has denounced doctors’ strike, saying it is a pressure card used by doctors to respond to their demands.

Speaking at the National Blood Transfusion Workshop in Khartoum on Tuesday, Vice President Hassabo Abd al-Rahman pointed that medicine is a humane profession and it is not wise to use it as a pressure card.