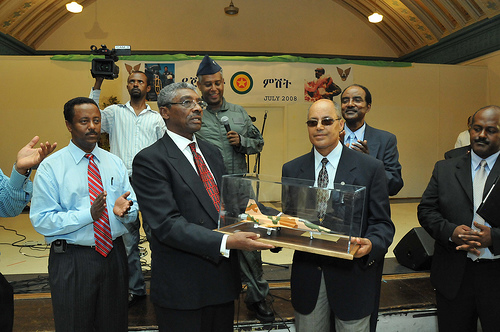 General Legesse rose to prominence during the 1976/77 Ethio-Somali War in which he destroyed five MiG fighter planes of Somalia in an air-to-air combat, and later destroyed a sixth plane that was on the ground along with other enemy arsenal.

General Legesse was shot down and captured by Somalia in which he was held a prisoner of war for 11 years most of which time was in solitary confinement.

General Legesse returned to Ethiopia during an exchange of POWs, and was promoted to the position of Brig.-General, while he was decorated with the highest order for heroism.

While serving his country as an instructor at Debre Zeit Air Force base, the national hero was forced into exile when TPLF/EPRDF took over the reigns of power in 1991.

The General is survived by two children, Nestanet Legesse and Lulit Legesse.

Gen. Legesse. attended the Harar Military Academy before joining and graduating from Flight Training Squadron. As an Ethiopian hero, a professional of the highest order, and a patriot, he went beyond the call of duty in the defense of Ethiopia’s sovereignty and territorial integrity during the invasion of Ethiopia by Siad Barre’s forces of Somalia during late 1970s.

Gen. Legesse, then a flying officer, went on a mission flying F-5 E fighter jet. He destroyed six of Somalia’s fighter jets in an air-to-air combat and on the ground. He also destroyed much of the invading army’s weaponry on the ground during that eventful and historic mission before he was shot down by enemy fire. Gen. Legesse was then captured and suffered for eleven years in solitary prison in Somalia. After eleven years , he was finally released and came to his beloved country as result of a prisoners of war exchange agreement made between the then government of Ethiopia and that of Somalia.

Upon his return in 1988, Lt. Colonel Legesse was promoted to the rank of Brigadier General and awarded Ethiopia’s highest order of medal for heroism (Ye Hibretesbawit Ethiopia Ye Jegna Medalia) . For the past several years, Gen. Legesse has been a resident in the Washington Metro area with his family.