Home frontpage Africans in China: The Pivot Back 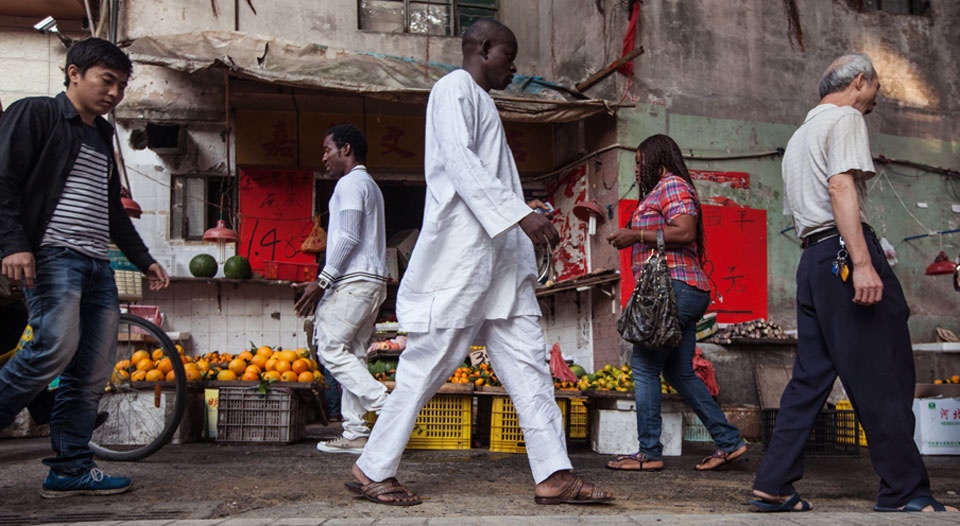 As China’s involvement with Africa intensifies, media coverage has also proliferated, bringing to the forefront the everyday interactions between Chinese and Africans within Africa. What is less discussed is the story in reverse: how Africans are interacting with the Chinese in China.

The most emblematic of the African experience in China is that of African migrants in the southern metropolis of Guangzhou, China’s third largest city after Beijing and Shanghai. In the late 1990s, Africans began moving to the city to take advantage of the boom in export trading. Estimates of the number of Africans living in Guangzhou range from 20,000 to 200,000. A better estimate is difficult because of the itinerant nature of Africans in China. Some African nationals stay as little as three months, while others settle permanently. Unlike the majority of Chinese migrants who go to Africa with the backing of a Chinese corporation, Africans usually come individually with little financial capital and few employment guarantees. An African relocating to China is often taking a gamble that reflects both push and pull factors, including poor conditions at home and the lavish opportunities apparently awaiting in the world’s second largest economy.

Lately, however, Africans seem to be relinquishing their Chinese Dream. While no official data exist, anecdotal evidence suggests that hundreds, if not thousands, of Africans are returning home. This trend, commonly referred to as “U-turning,” is driven by a combination of social and economic factors.

First, China’s economy is maturing. When Africans first arrived, the rapidly growing Chinese economy allowed African businessmen to purchase goods in bulk for resale in their home countries at a substantial markup. However, in recent years, partly due to international pressure, China has cracked down on violations of intellectual property rights, hindering the production of cheap, often-counterfeit goods. Rising Chinese workers’ wages and Africans’ own living costs have cut profit margins for these African middlemen. Furthermore, in response to the growing number of foreigners in the country, China recently made its first major reform to its immigration policy since 1986. The 2013 “Exit and Entry Administration Law,” seen by authorities as a natural next step to China’s development, leads to harsher overstay penalties and visa restrictions and has generated discontent within the African diaspora.

Second, Chinese racism and xenophobia of the African diaspora remains, even if perhaps less so than in earlier decades. This is due to a dearth of cross-cultural understanding and negative stereotypes from Africa’s colonial past. Compounding the issue are China’s centuries-old beauty standards, which view those with darker skin as less civilized and less worthy of being deemed beautiful. Given China’s ethnic homogeneity and lack of history of immigration, changing social attitudes is a monumental task. In a climate of greater economic uncertainty, Africans who have found it difficult to integrate socially are gradually realizing that the personal costs of staying may be too high.

Third, the Chinese government is sending mixed signals to the African diaspora as to whether or not it welcomes their presence. On the one hand, leaders at the highest levels continually espouse the friendship between the African and Chinese peoples, and the importance of South-South cooperation. People-to-people relations featured prominently at the 2015 Forum on China-Africa Cooperation, with the Chinese government pledging to host a variety of nationwide initiatives such as the “Year of an African country.” On the other hand, the Chinese government’s “beautification” campaign in Guangzhou’s ‘Little Africa,’ while part of a broader policy initiative and not dissimilar to demolition campaigns in other cities, has disrupted African lives and resulted in an unwelcome, heavier police presence. As with the demolition of churches as “illegal structures,” the supposedly innocent dismantling of street markets and signage promoting foreign trade may carry political undertones: a Wikileaks document reveals that government officials were once concerned that the concentrated display of Africans in Guangzhou would “[prompt] many Chinese to move out,” suggesting that beautification efforts may be aimed at dispersing migrants to other parts of China, or out altogether.

Fourth, changing economic conditions within African countries have caused some Africans to reconsider China. The rapid growth of several African economies combined with heavyChinese investment in Africa has created opportunities that did not exist two decades ago. Furthermore, the collapse in commodity prices in resource-dependent African countries have played a factor, notably in Nigeria. Abuja’s currency policy has imposed restrictions on dollars leaving Nigeria, constricting African businesses abroad as they are not able to repatriate revenues. This is particularly important for African traders in China who use dollars from their origin countries for business operations. The depressed oil market and slowing Chinese economy, which is a large oil importer, suggests that the dollar’s scarcity will not alter anytime soon.

Going forward, there is little sign that the African exodus from China will abate. While some African migrants are dispersing to rural or peri-urban areas, most may not be willing to wait for Chinese government initiatives that would encourage them to stay. Official Chinese insensitivity to African residents may lose China its most valuable proponent for one of the most dynamic and potentially consequential partnerships in the twenty-first century.