Ethiopia’s Prime Minister Hailemariam Desalegn, who addressed the opening of the forum, said that Africa suffers from a number of security and political challenges which requires African leaders to develop a strategic vision to resolve them.

He saw that the large participation of the African leaders in the forum underscores their keenness to promote the common understanding to achieve security and stability in the region.

The Ethiopian premier also mentioned the challenges of peace and security in the continent and ways to resolve them, pointing that Africa has begun to tackle those challenges. 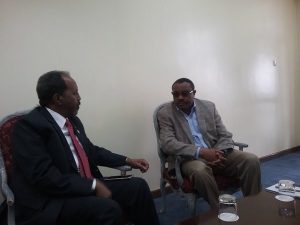 He added that the forum offers a good opportunity to exchange views, ideas and expertise, saying the world is facing unprecedented and complex problems.

Desalegn further called for the importance of cooperation among African leaders to develop the continent, saying they look forward to securing participation of all Africans to face the existing threats.

Meanwhile, the chairman of the fifth Tana High-Level Forum and former Nigerian President Olusegun Obasanjo underscored the importance of the forum to support and promote cooperation among African nations to resolve the challenges facing the continent.

He added that the forum seeks to achieve the adequate solutions for the African problems, expressing hope that the Darfur referendum represents a step forward to achieving peace, development and stability in the troubled region.

Obasanjo added that the participation of the Sudanese President Omer al-Bashir in the forum underlines his keenness to resolve the Sudanese and African problems.

He further pointed to the role that should be played by the African leaders, saying if they have strong will they can resolve the problems facing the continent.

The former Nigerian President also mentioned the problems and conflicts in the Africa besides the migration of young African to Europe, saying the only way to prevent migration is to develop a strategy to create jobs and eradicate poverty.

He pointed to the role of the external world in creating the security challenges in the African continent.

The Tana Forum was established in 2009 in line with the Tripoli Declaration issued by the extraordinary African summit, which was held on August 31 of the same year to deal with the conflicts of the continent.

It intends to boost Africa’s struggle to reposition itself in the global security agenda, operationally and normatively, by giving vent to the idea of African Solutions to African Problem in its peace and security affairs.

The whole aim of the forum is for Africa to eventually control its own security destiny by crafting home-grown solutions and avoid externally designed solutions particularly those driven from neo-realist assumptions.

Over 200 participants including a number of African heads of state and governments, academics, representatives of NGOs and officials of regional, continental and international organizations.