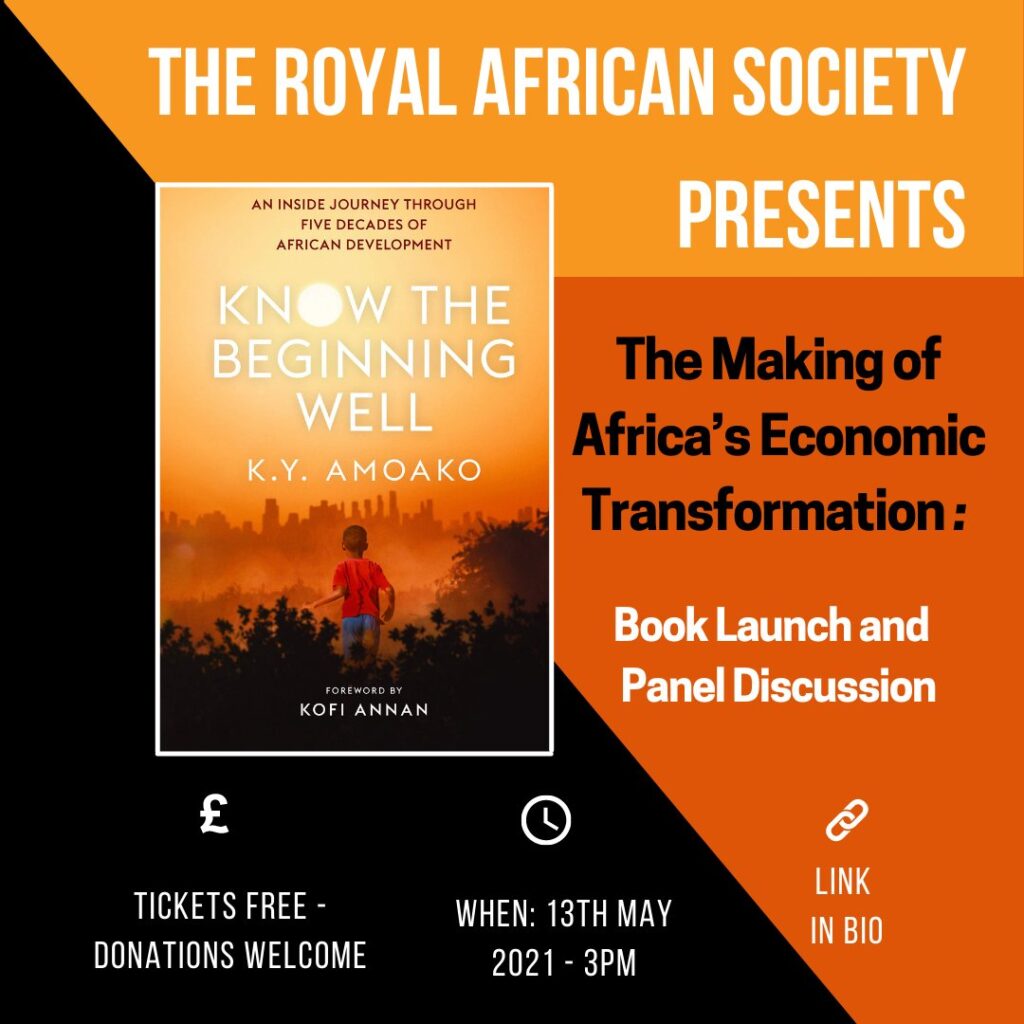 EVENTS: Africa’s ministers of finance and economic development convened in Algiers on 8 May 2001 for their annual meeting. Their conference is usually unremarkable: this was a rare occasion in which it was momentous. In his memoir Know the Beginning Well, K.Y. Amoako provides a unique insider’s view. I was also there, as a member of his team.

The conference one agenda item: to adopt a unified proposal for a continent-wide rejuvenation programme. The Millennium African Recovery Plan (MAP) had originated as an initiative by South Africa’s president Thabo Mbeki for the African ‘renaissance’, which would among other things reset development partnerships between the continent and its major donors, and facilitate South African private capital finding investment opportunities in the rest of the continent, thereby helping to fill Africa’s estimated $64 billion finance gap.

Mbeki’s initiative had the strong backing of Nigeria and Algeria. The UK Prime Minister Tony Blair was known to be an advocate–on the condition that Africa presented a unified plan. Not wishing to become a second-tier player, Senegal’s Abdoulaye Wade had also put forward his OMEGA plan, which had a stronger emphasis on infrastructure. In reality it was a bid for leadership.

Since Amoako took over as the Executive Director of the United Nations Economic Commission for Africa (ECA) five years earlier, he had refocused the institution on bridging the gap between Africans’ analysis of their economic predicament and the World Bank’s. He positioned the ECA as an intellectual powerhouse in the emerging international partnership for Africa’s development. The previous year, Amoako, had crafted his own set of proposals for economic recovery. Initially floated as a ‘Global Compact for Africa’ this was refined in discussion with the South African MAP team to become the ‘Compact for Africa’s Recovery’.

The ECA set the agenda for the Algiers conference, which began with unifying the MAP, OMEGA and Compact for Africa’s Recovery. Technically, this should not have been a difficult task, and as an enthusiastic technocrat, Amoako assumed that the procedural hurdle would be vaulted in the opening session, after which the ministers would turn to details. It didn’t happen.

After the strong declarations of purpose in the opening session, the conference hit a roadblock. First Senegal and then South Africa refused to compromise. Almost the entire meeting was taken up with shuttle diplomacy among hotel rooms while the planned sessions were put on hold. It was the politics of positioning: who was to be heralded as the leader. It was as though the delegates had been instructed that it was better for the talks to collapse than for their rivals to emerge with the credit. Just as the South Africans and Senegalese reached a deal, the Algerians stepped in demanding trivial but problematic changes, just to show their weight.

I remember Amoako opening a bottle of wine in his hotel suite to celebrate success on the final evening–‘success’ meaning that there was an agreed final communiqué to adopt what was now called the ‘New African Initiative’. There had been neither time nor energy to discuss the innovative ideas on the table.

Among these proposals formulated by the ECA was the African Peer Review Mechanism (APRM), a radical idea to shift away from donor-imposed conditionality to a collective African responsibility for good governance. It was the counterpart of the African-led concepts of ‘sovereignty as responsibility’ and ‘non-indifference‘ to egregious violations of human rights–a recognition that Africa needed to be honest about its own failures and to address those failures itself. While the ‘New African Initiative’ went forward to the summit of the Organisation of African Unity two months later, the APRM took another year to win approval.

Amoako’s vision was that Africa should own the goals and strategies for economic development, and that this would be workable if the principles and institutions for governance were in alignment with international best practices. Africa might not be able to challenge the orthodoxies of the Bretton Woods Institutions–the so-called ‘Washington Consensus’–but if the continent acted in a coordinated manner, then it could maximize its room for manoeuvre.

A few months after the OAU adopted the plan, it was renamed the New Partnership for Africa’s Development (NEPAD). It was the first continent-wide economic blueprint to win major backing from Africa’s international donors. But under the same pressures that had turned the Algiers conference into a haggling process, NEPAD morphed into a mechanism for coordinating projects instead than a shared set of norms and principles. The progress was incremental rather than transformative.

Chapter 11 of Know the Beginning Well is subtitled ‘A look behind the scenes at getting NEPAD off the ground.’ It deals with that meeting: that was the point at which Amoako’s professional expertise and ambition, aligned with shared vision among some African leaders and international development ministers (especially in Europe), met the transactional calculus of Africa’s real politics. For him it was a salutary awakening about the petty games played by political leaders. It is a testament to the energy behind the transformative agenda that Amoako and his fellow travellers got as far as they did.

Twenty years on, we can see the fruits of those efforts–and also how some of the pickings have been greedily gobbled up.

One of the great successes of the development partnership decade was that most of Africa’s debt to the OECD and multilateral institutions was forgiven and the proceeds of the write-off were ploughed into supporting government-led programmes to attain the Millennium Development Goals (MDGs). In the decades of rapid growth that followed, the biggest economic partner suddenly became China. Its focus was infrastructure and natural resource extraction, and it has been ready to invest and lend heedless of the complex governance assessments championed by the ECA and NEPAD. In their rush to take Chinese loans, many African countries have fallen into a new debt trap, with a creditor unlikely to be forgiving.

Africa’s development partnership decades saw impressive growth, poverty reduction and improvements in human development indicators. But too many elites found the possibilities for self-enrichment too enticing. The ECA’s own High-Level Panel on Illicit Financial Flows (which reported in 2015) found astonishing levels of corruption and capital flight, with foreign investors, African businesspeople and leaders in cahoots. In extremis these funds were used to buy off entire political systems.

The single biggest case is state capture in South Africa under Jacob Zuma, which the government of Cyril Ramaphosa is struggling to undo. There have been authoritarian-kleptocratic turns in countries from Tanzania and Uganda to Mali and Côte d’Ivoire. In the case of Ethiopia, poster child for the Millennium Development Goals, the current elite is killing the goose that laid the golden egg, its fall shown dramatically by the disinterest of foreign investors in bidding for the crown jewels of the government’s privatization programme, Ethiopia Telecom.

Another success was the African response to HIV and AIDS. Amoako identified the pandemic as the greatest threat to African development–a governance and economic disaster in the making as well as a health crisis. The ECA convened the second Africa Development Forum on the theme of HIV and AIDS as Africa’s greatest leadership challenge in 2000 and established the Commission on HIV/AIDS and Governance in Africa (CHGA) (in which I was involved) thereafter.

When the CHGA reported several years later, its findings were unexpectedly optimistic: Africa had avoided the feared societal and governance crises associated with AIDS. One reason was that anti-retroviral therapies had been rolled out more expeditiously and accessibly than anyone had anticipated, due in large part to international advocacy for affordable treatment. Another was that the HIV and AIDS response was guided by principles of human rights and inclusion.

Sadly, Africa set aside these hard-learned lessons when Covid-19 struck a year ago, opting instead for off-the-shelf top-down biomedical templates for pandemic response. African leadership on HIV and AIDS had been mixed but was ultimately strong; on Covid-19 it has been almost non-existent. This is encapsulated in the bitter irony that the Director General of the World Health Organization, Tedros Adhanom, elected to his position because of his extraordinary record in improving the health outcomes for Ethiopians, was rejected and denigrated by his own country.

Amoako’s memoir obliges us to reflect on the shifting doctrines, goals and performance of African economic development. The zenith of those efforts was NEPAD, and the origins story of that initiative also tells us much about the politics that makes development function or fail.

Read the original of this report, including embedded links and illustrations, on the African Arguments site.