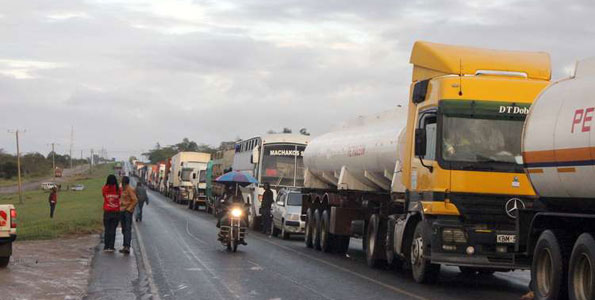 Mombasa handles imports such as fuel and other vital goods for Uganda, Burundi, Rwanda, South Sudan and eastern Democratic Republic of the Congo, and interruption of traffic along the highway could affect regional business.

Queues began forming at about 8pm local time on Sunday after three trucks were involved in an accident in the Salama area about 100km (65 miles) from the capital Nairobi.

Police and truckers stuck on the road said although the traffic had started moving slowly, queues were now almost 60 km long on both sides, worsened by overlapping motorists.

“I left Nairobi yesterday morning and over 24 hours later, I am not even half way to Mombasa,” Alfred Ngesa, a truck driver returning to Mombasa from Kampala, Uganda, where he had delivered steel metal, told Reuters.

“I am supposed to make two trips this week, but this traffic will mess up my schedule.”

Police deployed cranes to clear the blockage which included a fuel truck that had burnt down after the accident.

“Our officers have been at the affected areas the whole night and right now at least there is some slow movement. By this evening, everything should certainly be back to normal,” said Jacinta Muthoni, the Kenya Police traffic commandant.

In November, a similar blockage on the same highway took 60 hours to clear.

Port officials in Mombasa said it was too early to feel an impact of the blockage on cargo uptake from the port.

“If the jam continues, it will eventually begin to slow down our operations,” said Bernard Osero, the Mombasa port corporate affairs manager.