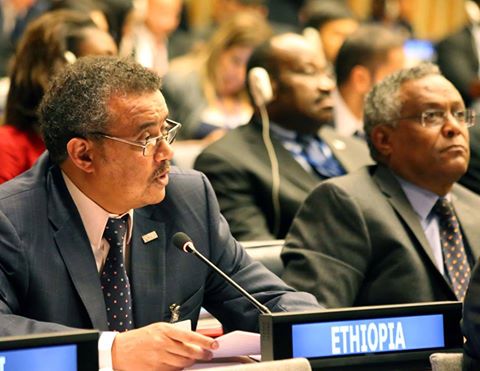 New York (HAN) September 25, 2015 – Public Diplomacy and Regional Investment Initiative News. The Ethiopia Foreign Minister  Statement, at the 39th Annual Meeting of Ministers of Foreign Affairs of Group of 77.
Mdm. Chairperson,
Allow me at the outset to express my delegation’s appreciation to you, Mdm. Chairperson, and your delegation, for the manner in which you have been steering the work of our Group this year.

My delegation would also like to congratulate the Kingdome of Thailand on its election to assume the chairmanship of our Group in 2016.

We are having this year’s Annual Ministerial meeting of our Group at a very critical time. The alignment of events whose outcomes are of great significance to developing countries affords our Group the opportunity to strive with greater resolve to ensure the creation of a fairer world, and conditions that allow addressing our common but differentiated responsibilities. It was just last year that we celebrated the 50th anniversary of the establishment our Group whose founding principles have stood the test of time and served us well to better project our positions in the critical intergovernmental negotiations in the course of this year.

The post 2015 development agenda which we are about to adopt at the Summit that will be underway tomorrow is the product of hard-fought negotiations and three years of laborious work. It is impossible to say we achieved everything that could ideally have been achieved. The 2030 Development Agenda does not lay the basis for a just and equitable global economic and trading system. That our world will continue to be characterized by the lack of level playing field is undeniable. The systemic and structural challenges that the developing countries face in international economic relations require a more determined and prolonged efforts to be addressed to the satisfaction of the developing world. In this regard, the demand for the adherence to the principle of common but differentiated responsibilities broadly and beyond climate change is most appropriate, both on moral ground and on account of pragmatic consideration.

But this does not mean that the 2030 Development Agenda, and its 17 Goals and 169 targets are not major achievements. They are. In fact, the commitment to eradicate extreme poverty in 15 years and the fact that this was done by consensus is indeed a major progress toward laying the basis for a more meaningful international cooperation. Moreover, to a large extent the Goals and the targets do reflect the transformative and ambitious nature of the 2030 Agenda. Here, there is no doubt the key is the means of implementation whose effective mobilization and provision call for a much more strengthened international partnership. An adequate and strengthened means of implementation is therefore pivotal to achieving these lofty objectives. My delegation believes that the Addis Ababa Action Agenda which we adopted last July should therefore be soon put to action so as to commence the task of garnering the necessary means for the implementation of the ambitious and transformative agenda of the Post 2015 Development Agenda.

Over the years, we have witnessed the economies of some of the members of our Group shift to higher trajectory and they have developed the capacity to be real bulwark for the South-South Cooperation. We therefore see them not only as success stories but also as partners in the South from whom critical lessons can be drawn and with whom genuine partnership can be forged. The South-South Cooperation is testimony to such partnership which we believe should further be enhanced and strengthened.

As we draw closer to this year’s business of our Group, there remains one critical affair which deserves the utmost attention of Our Group. As we all know, efforts are now underway to have a legally binding agreement on climate change in Paris. This is another development agenda that the international community has to get right. We in developing world can’t afford to continue to suffer from the effects of climate change which would cost us not only our hard-fought development gains of today but that of the future. The ambitious agenda which we are going to adopt at the Summit clearly indicates the seriousness of this situation and calls for urgent measures to be taken to address the challenge. I believe we can build on the good start we have had so far this year and aim further to achieve successful outcome at the climate negotiations in Paris.

In conclusion, Mdm. Chairperson, as we stand at the dawn of the new development era celebrating the 70th anniversary of the founding of our Organization, we must continue to stand firm in our resolve to further strengthen the solidarity and unity of our Group to ensure that our collective interests, needs and aspirations are well advanced and promoted in the years to come.

My delegation once again would like to express its appreciation to you and members of your delegation for the able leadership you have exhibited in guiding the work of our Group and would like to equally assure the Kingdom of Thailand of my government’s fullest support and cooperation in discharging his duties as chair of our Group next year.