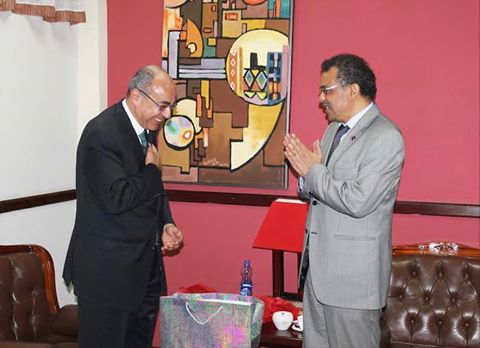 The Ethiopian Foreign Minister Dr.Tedros Adhanom bids farewell to the outgoing Egyptian Ambassador to Ethiopia, Mohammed Idris on Tuesday, 18, 2015. The Minister appreciated Ambassador Mohammed Idris for his contribution in strengthening bilateral relations between ‪‎Ethiopia and ‪Egypt during his tenure. Dr. Tedros said that a lot has been done so far and the next stage is how to sustain and take the two countries relationship in to a higher level.

Regular consultation should nurture the existing relationship for comprehensive partnership in private to private, public to public and government to government relations, he said. Ambassador Mohammed Idris on his part said that the two sisterly countries share culture, religion, societal value and civilization in common and should work and prosper together. He added that collective effort is much needed to sustain the existing relations.