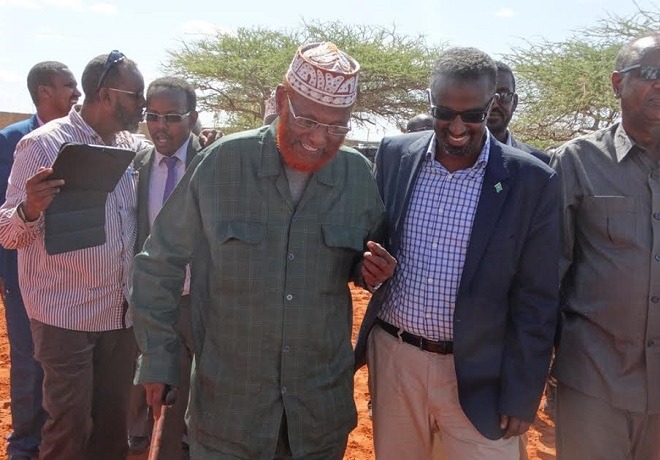 Addis Ababa (HAN) May 23, 2015 – Public Diplomacy and Regional Safety and Security News – By. Hailemariam Gebremeskel (Geeska Afrika Online Reporter in Addis). Since the beginning of the formation of Federal Government, the election of Hassan Sheikh Mohamud as President of Somalia and the end of Ethiopia’s Pillar of Defence military operation in Southeran Somalia, Ahlu Sunna WalJama (ASWJ) has steadily been moving towards a more political stance in Central Somalia, with the help of Ethiopia’s new security strategy in Somalia.

Ahlu Sunna WalJama (ASWJ) are the sufis the moderate Islamic group according to the USA state department. They are great ally against the war on terrorism in Somalia against Al-Shabaab, besides that they control key towns in the central regions of Somalia, they should be involved the upcoming formation of Cental Region’s Administration. They have close relations with Adis ababa, Ethiopian security forces (AMISOM) and mainly led by Ambassador Ahmad Abdisalaam.

Ahlu Sunna WalJama (ASWJ)’s transformation (Somalia-based paramilitary group) from reformist movement to militant organisation came about when it started to engage in political activity and participated in an armed struggle against Al-Shabaab’s terror and occupation of the major cenral Somalia towns and villeges.

Ahlu Sunnah wal Jamaah (ASWJ) And Somali politics: How come this group plays a signficant role in Somali politics and why are they are considered by the International community to be a key stakeholder in Somalia?. Ahlu Sunnah walJamaah take part in almost all international conferences and have been signotries of many deals, such as the Somali National Consultative Constitutional Conference. Ahlu Sunnah walJamaah are also took part in the London Conference on Somalia organised by the British Government, along with former TFG, Puntland, Somaliland and Galmudug.

The prime reason for the strategic shift in Ahlu-sunna was the implementation of the former Deputy Prime Minister Ahmad Abdisallam’s Engagement Plan, by which Ethiopian forces withdrew from all its settlements and dismantled all its military bases in the Southern Somalia towns in late 2009, but Ahlu Sunnah wal Jamaah (ASWJ) again regains Dhusamareb Control, with the help of AMISOM forces in Central regions.

According to Geeska Afrika Online news data: Last February, Prime Minister Omar Abdirashid Ali Sharmarke appeals for cease fire between the warring sides of Guri El. He warns that fighting might give Al-shabaab a chance to regroup in Central Somalia.

The participation of Ahlu-sunna in the institutions created by the International community framework –not only in the Federal parliment but also in several national security agencies in Somalia, which contributed to its gradual move towards moderation and stop Al-Shabaab’s Wahabi doctrine in Somalia.

The latest opinion polls of the IGAD2020 Regional Security Watch and Survey Research show how the popularity of Ahlu-sunna leaders such as Ambassador Ahmad Abdisalaam and Sheikh Ibrahim Sheikh Hassan are now greater than that of the Galmudug Authority’s President Abdiqaybdiid and of his close ally Xubbin iyo Xeeb Administration.

The declaration of presidential candidacy,  the  visit of Ahmad Abdisallam’s Engagement Plan trip to Cadaado and the Ahlussunnah Wal Jamaah Authority’s permission to Dhusamareb city to hold several rallies in the region on the occasion of the upcoming regional presidential election and its foundation are a reflection of the Ahlussunnah movement’s rise in stature with its leader. Somalia: The New Tactical Attack is a Threat to Hotels