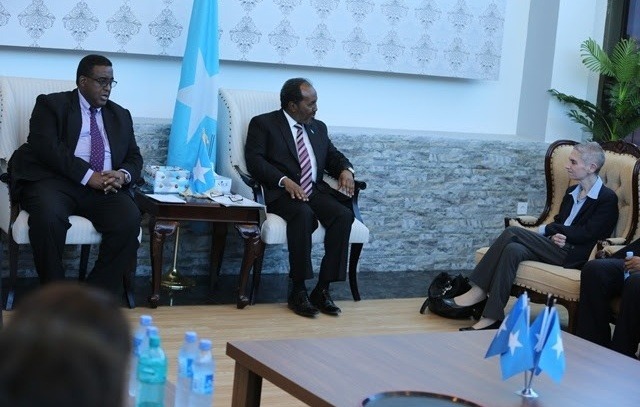 Mogadishu (HAN) June 7, 2015 – Public Diplomacy and Daily Security Briefing for Regional Security News. Ambassador Tina Kaidanow is an envoy of U.S. teamwork with other nations key to fighting terrorism. Fighting terrorism globally requires partnerships with other countries, such as Somalia, Djibouti and Somali Diaspora, Tina Kaidanow, U.S. ambassador-at-large and coordinator for counter-terrorism, said.
Ambassador Tina Kaidanow said terrorist group Al-Qaeda’s power has diminished in recent years through loss of leadership. However, other groups are taking up the same cause as Al-Qaeda, and some pose a significant threat, Kaidanow said. The Islamic State of Iraq and the Levant (ISIL) has been “hugely destructive” in Iraq and Syria, Kaidanow said.

“The emergence of these more radical and violent groups is, in most cases, associated with a loss of effective government control, as in Yemen, Syria, Libya, Iraq and Somalia,” Kaidanow said. “Groups that have become active in these areas are mainly localized, but some pose a threat to Western interests in Europe and in the United States, and we take these security concerns very seriously.”

Ambassador Tina Kaidanow said developing more partnerships to combat the terrorist groups is vital in the counterterrorism fight. She said more than 60 partners are contributing in anti-ISIL efforts to stop the group’s mobilization, interrupt its financial resources, “counteract ISIL’s messaging and undermine its appeal.”
Kaidanow said the U.S. can partner with others, both governmental and nongovernmental. Kaidanow added partnerships are broken down into five different groups of countries.

The United Kingdom, France and Australia are countries in the first group and have proven capable of responding to terrorist threats. The second group is made up of regional countries or institutions, such as AMISOM from East Africa, which have the ability to fill gaps that individual countries can’t.

The third group is made up of countries such as Niger, Chad, Oman, Bangladesh, Tunisia and Mauritania, which have “the political will to work with us,” but need more resources to combat threats.

The fourth group includes countries that may have different definitions of terrorism, or have even exacerbated terrorist threats. Kaidanow said it is still vital that the U.S. reach out and attempt to work with these countries.

The final group includes countries such as Russia and China, in which cooperation hasn’t been consistent over time. Developing a more stable partnership with them is the ultimate goal.

“The foreign-terrorist-fighters issue reminds us that building partnerships is just the means to an end, not an end in itself,” Kaidanow said. “Moving toward a model where we have a broad range of capable governmental, nongovernmental and institutional partners will aid us in comprehensively degrading the threats and, perhaps even more critically, getting ahead of the curve on curbing the growth of violent extremism.”

Background: Ambassador Tina Kaidanow assumed her current position as Ambassador-at-Large and Coordinator for Counterterrorism at the State Department on February 18, 2014. Previously, she served as Deputy Ambassador at the U.S. Embassy in Kabul from September 2012 to October 2013. Ambassador Kaidanow became the Principal Deputy Assistant Secretary in the Bureau of European and Eurasian Affairs in July 2011, having served earlier as the bureau’s Deputy Assistant Secretary responsible for issues related to Greece, Turkey, Cyprus and the Caucasus (August 2009 – June 2011).