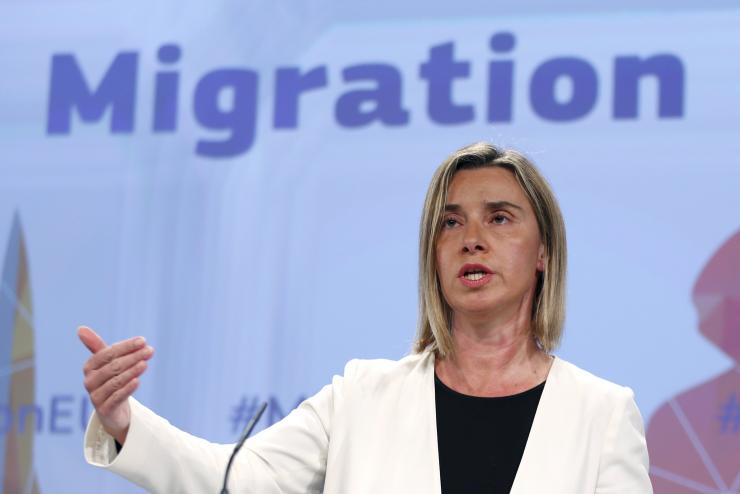 Berlin (HAN) June 4, 2015 – Regional Humanitarian Security News. The European Union is planning to act against human traffickers from Eritre, Somalia, Sudan, Libya and Ethiopia in the Mediterranean. But the plight of Humaniterian refugees can only be relieved when, the EU’s foreign policy engagement is strengthened. The EU needs to obtain a mandate in order to operate under Chapter 7 of the United Nations (UN) charter. Bid to gain UN approval for EU migrant mission ‘paused’.

What are the current pressures on Europe from non-EU migrants fleeing war and poverty in Eritrea, Somalia, Ethiopia and West-Africa?

According to Ronja Kempin, Ronja Kempin (swp) in Berlin: The European Union is planning to act against human traffickers in the Mediterranean. But the plight of refugees can only be relieved when the EU’s foreign policy engagement is strengthened, say Ronja Kempin and Ronja Scheler.

Following the latest tragedy involving migrants, 28 members and leaders of the EU have initiated plans for a military operation to combat criminal gangs who smuggle refugees in thousands per ship. The details of the initiative still need to be clarified, and the body of water where the operation will cover needs to be decided. This will require Libya’s permission to destroy the smugglers’ boats in its territorial waters. The EU needs to obtain a mandate in order to operate under Chapter 7 of the United Nations (UN) charter.
Despite these measures that still need to be decided upon, the operation will come into existence, as the pressure on the EU to stop deaths in the Mediterranean is too much to ignore.
The model for the new venture is based on the maritime European Union Naval Force Somalia, or Operation Atalanta, which came into existence in 2008 in order to counter piracy off the coast of Somalia and the Gulf of Aden.
As a result of the civil war in Somalia, a lawless space was created that allowed well-armed militias to operate. More and more ships, including some from the UN World Food Programme, which were delivering vital goods to Somalia, have been hijacked in the past. In the first nine months of 2008, ransoms extorted by the pirates reached anywhere from $18-30 million.
Operation Atalanta have succeeded in safely escorting over 300 UN ships to their destinations. In 2013-14, every attack by pirates had been foiled. This was made possible by the fact that the EU deployed 1,200 personnel, four to six vessels and two to three reconnaissance aircraft to patrol an area one and a half times the size of Europe.
However, when looking at these numbers, it must be kept in mind that these results only became visible in 2012, when the number of attacks dropped from 176 to 35. The European Union’s many efforts on land contributed to this development, offering people in Somalia economic prospects and strengthening government structures: EU civilian missions EUTM Somalia and EUCAP Nestor have contributed to education and building up the capacity of the Somali army and naval forces since 2010.
Through its SHARE program, the EU has been softening the humanitarian needs of the population since 2011. The first free elections in 45 years, which led to the establishment of a stable political process in Somalia, were organized by the EU.

In 2010, Brussels realized that the causes of piracy were on land, not water, and that piracy could only be sustainably resolved there. Eventually, a holistic approach led to success.

Confront Causes of Migration
The lessons from Operation Atalanta are relevant for the refugee crisis in the Mediterranean. Only an approach that addresses root causes for migration can provide a long-term solution.
This is even more true because the situation in and around the Mediterranean is more complex than in Somalia. Piracy in the Horn of Africa was a result of the dislocations in one country. The failings of the economic system and political structures led to the increased number of Somali pirates.
In contrast, the illegal smuggling of refugees over the Mediterranean, which the future mission in Libya will be directed against, is not a problem that can be solved in the smugglers’ country of origin.
The refugees who are crossing to Europe from Libya come from the wide reaches of the neighboring region: Syria, Eritrea, Mali, Nigeria and Gambia. Migrants are running from war and political prosecution. Destroying the smugglers’ boats will allow the EU to contain the traffickers. But the people will continue to flee to Libya if the root causes of their flight are not addressed. In the meantime, this will only lead to the formation of refugee camps at the gates of Europe.
The use of military force, as well as many other measures that dominate debates — such as the extension of the rescue operation, the revision of the Dublin Asylum System or the easing of the legal migration process — must be integrated into an active and comprehensive foreign policy vis-à-vis the countries of origin of the migrants.
European policy toward its neighbors, cooperation on development and crisis management must be brought closer together. EU member states are not allowed to shirk from getting involved in conflicts such as Syria. The EU has a responsibility to create a peaceful and democratic environment in its neighboring regions. It continues to view itself as a source of peace, but it rarely conforms to this description.
A military operation in the Mediterranean might lessen the pressure on the EU’s outer borders. But the only thing that would help refugees is a comprehensive European foreign policy involvement.
Point of View: was translated to English by Anna Pivovarchuk of Fair Observer