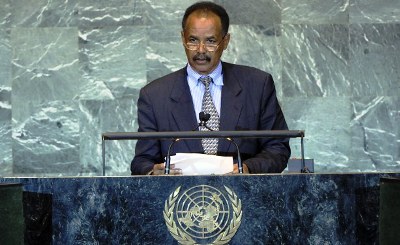 At a meeting with the South Sudanese officials in Eritrea over the weekend, Efwerki reportedly said what South Sudan was experiencing was externally influenced, not an internal matter.

“That is what is bringing this confusion and the prolonging of the resolution of the conflict. You must be careful and do what is right to the people of South Sudan and this is now the time to do it. Do not wait for others to tell you what to do because even if you do what they told you, it will not be a South Sudanese owned solution,” Efwerki reportedly said in the capital, Asmara.

The South Sudanese leader, in his message to his Eritrean counterpart, reportedly assured the Eritrean government and its people of his continued support for them.

Meanwhile, South Sudan’s ambassador to Eritrea, Paul Macuei was credited for improving relations between Eritrea and the young nation.

In the past, however, South Sudan government repeatedly accused Eritrea of allegedly supporting its armed oppositions groups, specifically the South Sudan Democratic Movement (SSDM) led by late George Athor Deng and its cobra faction under the leadership of the present Greater Pibor chief administrator, David Yau-yau.

Observers have, however, attributed the cause of strained relations to Ethiopia’s involvement in the negotiation of South Sudan conflict, claiming Eritrea would rather provide support to a country with sour diplomatic ties with Ethiopia for it believe the latter had contributed in her isolation in the regional associations, including suspension of her membership at Intergovernmental Authority on Development (IGAD) and imposition of sanctions by the United Nations.

An aide who accompanied the South Sudanese envoy to Eritrea told Sudan Tribune on Tuesday that the chief negotiator travelled to Asmara on instruction of president Kiir to deliver a special message assuring support of his government and people of South Sudan to the Eritrean government and its people. South Sudanese leader, according to the source, also applauded the role the Eritrean government and its people played during the course of liberation struggle from neigbouring Sudan, expressing hope to continue with the same spirit of cooperation and support.

Macuei also confirmed, the visit of the lead negotiator, describing it as a very important step towards strengthening relations between the two countries in the region.

“Eritrea is a very important country to us as South Sudanese and as government, considering the support we have had from the government and people of Eritrea during the struggle. It is one of the countries whose relations are rooted on the historical ties and one of the countries we consult on important matters. Because of these historical relations, we believe Eritrea can play a role in the search for peace in our country because we are looking for an African solution to this current conflict”, said Makuei.

He acknowledged that Efwerki was concerned about the negative role being played by some foreign countries, many of whom the latter believed were fueling the conflict.

“A real friend can always tell you the truth. This is what the Eritrean president has done. He is not just a president of one the countries in the region to which we belong but someone who has played an important role in our liberation struggle. So he knows our real friends and who are those working to see us fail, which I don’t think will happen. They will never succeed because our friends and brothers like president Afwerki will always stand with us and give support whenever necessary”, the ambassador.

He disclosed that Afwerki extended invitation to his South Sudan counterpart to visit Eritrea, adding that arrangements were already being made for the trip to take place. (ST)