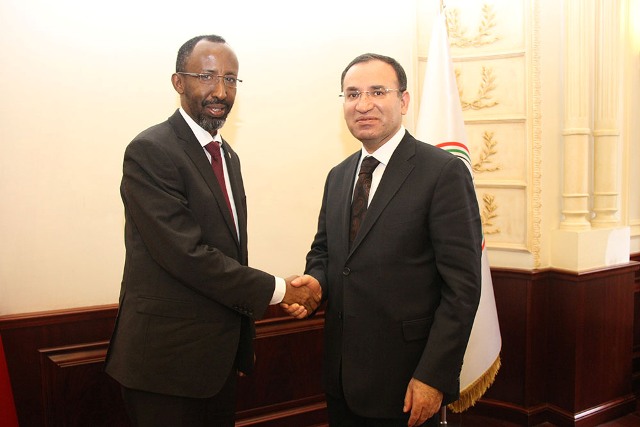 In the early 1990s the Somalis were one of the world’s 5 poorest countries with a population of 15,000,000. Today, with a population of over 30,000,000, it is a middle-income country (Southern Somalia and Somaliland) with an annual per capita income of US$300. With more territorial sea than land (Indian Ocean and Red Sea), marine resources have played a vital role will shape the contours of economic development, with natural resources-based being a key driver of economic growth. To future secure and continue growth, the Somalis will need to diversify its economy and balance its internal security issues to achieve sustainable peace and stability.

The Somali private sector Group has had a strong partnership with the Federal government to facilitate a transformation in the sector and its economics and to develop innovative financing schemes through the scale-up of renewable infrastructure in Somalia. The partnership with the EU, Turkey, America and global partners will also continue.

According to Geeska Afrika Online, The federal Justice minister Farah Sheikh AbdulQader, said  – ’Now we have the privilege of moving from state employment to private sector without forgoing the pensions. I have a strong feeling that todays’ youth will be much better off ’-

Minister Farah Sheikh AbdulQader, added his Geeska Afrika Online phone statement, ’Going forward, partnerships with allies will play a critical role to rebuild Somalia. This will be particularly important in view of the need to leverage additional resources to increase development impact in the country.’

The Somali president 2016 vision and the governments strategy would remain flexible, to respond to evolving government needs and priorities. Consistent with the lessons learned, program and project designs will be simple, innovative and contain an element of capacity building so as to minimize implementation risks.

The airport in the capital Mogadishu is witnessing a thirty day trip and Somalis return from neighboring countries for asylum after a long while back, after investments were previously dodged repellents conflict environment.

Somalia, which has been the scene of internal conflict since the collapse of the state in 1991 and other conflicts in which regional countries entered the party and even the United States, waiting for a political internally to return life to normal in according.

The Federal Justice Minister of Somalia, Farah Sheikh AbdulQadir says that the younger Somali generation under the age of thirty years, knows what it means the return of the state and its prestige after the collapse of a quarter of a century.

The federal minister farah AbdulQader pointed out several features to restore Somalia’s recovery, including the return of migrants and build a government that trusts its institutions of society and the existence of a large number of embassies.

He added that the government would contribute the possible ways to facilitate investment for returnees. The obstacles they include -broah- in infrastructure such as roads, port, maritime Valshehad For example needs to be structure is available for small businesses and individuals so far.

Accordingly, Somalia seeks to convince donor countries to re-build the infrastructure, according to Abdul Qadir, pointing to examples of these international contributions such as restoring building Mogadishu large hospital with the support of the Turkish government.
New signs: In turn, the Secretary General of the Arab Thought Forum Sadiq al-Faqih said that evidence suggests optimism after Somalia ceased to be a crisis of the neighborhood and the world, there is no longer freely piracy and other trans-boundary problems.

He added that there are signs of Somalia experienced a strategic importance, representing him and the stability of the Horn of Africa and the Arab region factor.
In a comparison between the countries collapsed and resurgent form Somalia, al-Faqih said that what makes this country special case do not compare a country like Iraq, for example, that a quarter of a century long period of collapse, where the country in the world has not seen what witnessed Somalia from destruction and neglect of the international community and siblings .

He says that all the jurist of intervention in Somalia intervention to its own agenda and gains from Iktansha crusher country.

He concluded that Somalia is moving towards stability, albeit slowly, and the difficulty in order to restore the state, but do not need the intervention of his brothers and his friends, wondering: Where covenants and donations promised by the countries of the world, The country can not face the challenges alone, without the aid of an international?