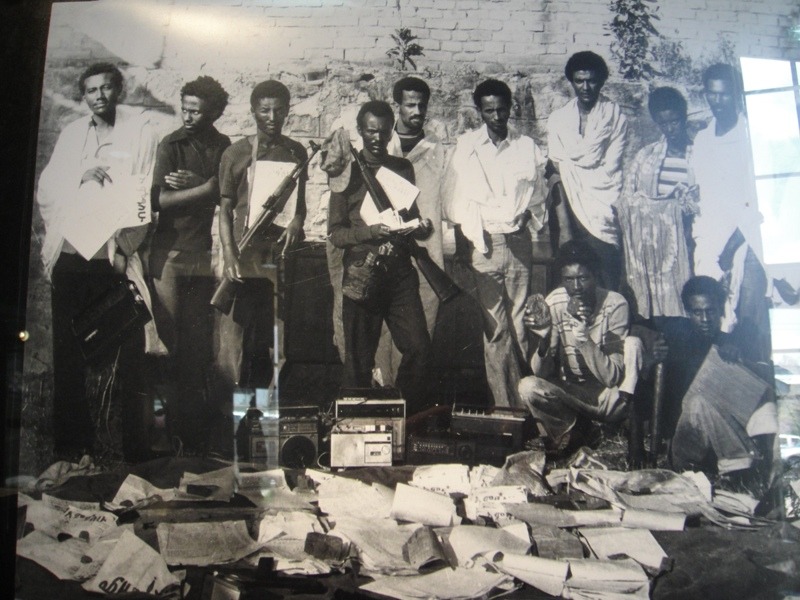 Asmara (HAN) November 30, 2014 – Expert Analysis, Your Power & Regional Influence Magazine, opinion page By  Tecola W. Hagos . In 1977–1978), was a violent political campaign in Ethiopia and Eritrea that most visibly took place after Communist Mengistu Haile Mariam achieved control of the Derg, the military junta, on 3 February 1977.  The Derg unleashed the Red Terror because it considered itself powerful beyond measure and that its opinion alone represented the “absolute” truth about Erirea.

My Tribute to the Victims of Mengistu Hailemariam and His Bloody Collaborators  Abugida Info.

I. Introduction
For the last six years every year, Engineer Girma Haile-Leul has been commemorating the brutal murder of the Sixty Ethiopian High Officials by the blood thirsty Mengistu Hailemariam and Collaborators. This year Girma has produced a video to commemorate the 40th Anniversary. In this noble effort he was assisted by Andenet TV of Seatle producer Woynegus Debebe and Ethiomedia. If it were not for Girma’s effort and such dedicated Ethiopians, this monumental national tragedy and national shame would have passed without much notice by the Diaspora Ethiopians or back home by the Ethiopian public. Shame on us all that we do not stand for justice, forget vengeance. We are something else, that we have the gall to tear down a national flag, scream at leaders in conference halls, endlessly demonstrate at the State Department on some abstract concept of freedom and justice to a people we will not even touch with a ten feet pole, and yet do not have the common decency to remember those victimized by Mengistu Hailemariam and his bloody Collaborators.
This form of devotion shown by Girma and his compatriots in their making sure that we remember the victims of the Derg far exceeds the raving and ranting of Diaspora politicians in their blind pursuit of political power by shouting and flinging insults and invalid rhetorical arguments et cetera. Not long ago, I wrote about my disgust with the Ethiopian Government pardoning of some twenty high ranking convicted Derg Officials some three years ago. I consider such pardon to be unjust and a violation of the rights of the victims and a permanent threat to our humanity. We are hypocrites to the bone. Those Derg Officials, now pardoned, had murdered and tortured countless innocent Ethiopians from 1974 to 1991 when they were in power. They showed no mercy or any humane consideration to any of their victims. Let me state again that the blood that was socking Mengistu’s hands and the hands of the convicted Derg Officials, released from prison, was not that of dogs, but of human beings—of our heroes and our fellow Ethiopians. [This article is adopted from my article of a couple of years ago:”The Courage to Swallow the Bitter Truth: A Response and a Cure.”
I write with great vehemence because of the fact that we are morally neutered and frozen in fear, and that we do next to nothing when our people are dehumanized and our heroes thrown into prison, while murderers and torturers are freed from prisons. This is also a chance to channel our resistance and opposition in the right direction away from the distortions of old ideology and possible usurped power structure in the hands of political predators.

II. How Responsible Nations Dealt with Mass Murderers
We find similar situations of the pursuit of justice in our own time in different countries especially in the West. The Government of Israel has hunted down Nazi Military Commanders and officers who committed war crimes of the Holocaust and brought such criminals to justice. Adolf Eichmann is one such criminal we all have heard or read about. The United States Government after the 9/11 attack in New York, Arlington et cetera where over three thousand United States Citizens and other individuals from different nations died, went to war in order to punish such criminals. In pursuing to bring to justice those who harmed its citizens, the United States Government was overwhelmingly supported by its citizens. The Government immediately launched massive attack on those who harmed its citizens; it annihilated a Government in Afghanistan, hunted down Al-Qaida’s founder Bin Laden and killed him where he was hiding in Pakistan. The United States Government’s record of hunting down such terrorists is exemplary. Whether it is President Bush or President Obama, they did not just say let bygone be bygone and let murderers go free, but they made those who hurt American Citizens pay the ultimate price for their crimes.
In 1661 England, the punishment for treason and murder was severe, but necessary and vindicated those who promoted social responsibility. It brought a degree of closure to the violence committed against the established order by Cromwell and his supporters. By contrast, in Ethiopia what we have is a very weak and abusive Government that is willing to forgive Derg Officials who committed no less crime than the Nazis did or the recent terrorists of 9/11 did, and yet let such criminals go free after serving a mere twenty years whereas justice would have demanded most of them to be hanged. Letting go free such convicted criminals, like the Derg Officials on some administrative ground of good behavior, regrets, apologies et cetera is not an advanced form of ethics or morality but a manifest weakness of a government that has no respect for human life or dignity.
Both in European countries and also in the United States crimes committed by military officers and/or civilian officials is a crime prosecuted in those countries; there are instances of deportations based on such findings of war crimes and crimes of atrocities against protected groups. Such legal prosecutions against war criminals and those who committed atrocities against innocent people is a mark of a just and strong society and state. It is only weak and degenerate societies that have no respect for human life that always resolve such issues the easy way out—letting go or pardoning vicious criminals, murderers and torturers of innocent people. The moral of all my presentations drawing from historical incidents in the treatment of mass murderers and those who committed treason is that the game is not over yet for justice for the tens of thousands murdered, tortured, and dehumanized Ethiopians..
As to the former Derg Members, especially Mengistu Hailemariam and his close associates that are taking refuge in foreign countries, I recommend that they be hunted down and either deported or taken care of wherever found. The reality out there of pardoning murderous Derg Officials is an injustice that simply affirms the baseness and also the weakness of some Ethiopians in the Diaspora. Capital punishment is justified in some of the cases of the criminal Deg Members, for such just punishment establishes the parameter of law and order. If individuals are pardoned after few years of imprisonment for horrendous crimes of mass killings, what is there to deter others from doing the same in the future?

Conclusion
In an article I wrote about three years ago titled “Forgiveness, reconciliation, and pardon: a challenge to a just society” (January 25, 2011), I emphasized that “forgiveness is hardly a political solution.” I elaborated on that theme further by writing that in a strong democratic society crimes are well defined in administrative traditions, in statutes and in case laws in advance. The legislative body in such a community is distinct from both the judiciary and the executive organs of the government. The judicial system is well developed, transparent, and independent of the executive. Prosecutors and investigators are well trained professionals with great moral integrity and abide by rules of procedures of the judicial system et cetera.
By contrast, in a society or community where the government structure is weak, such society or community tends to be despotic where the executive body has as its primary function to stay in power through illegal and undemocratic means. In such system of government, the individual citizen is subordinated to the interest of the state (the dictator) and the in-group. There is no consistent application of law if there is any law at all. Citizens are insecure, apprehensive of government representatives, and very fearful of their leaders. When I look back into the last twenty years in the life of Ethiopia, what I see is a wasteland of missed opportunities. The same type of justice that I am demanding for the victims of the Derg, may well be demanded by victims of the current Ethiopian Government Leaders. Tecola W. Hagos  Abugida Info