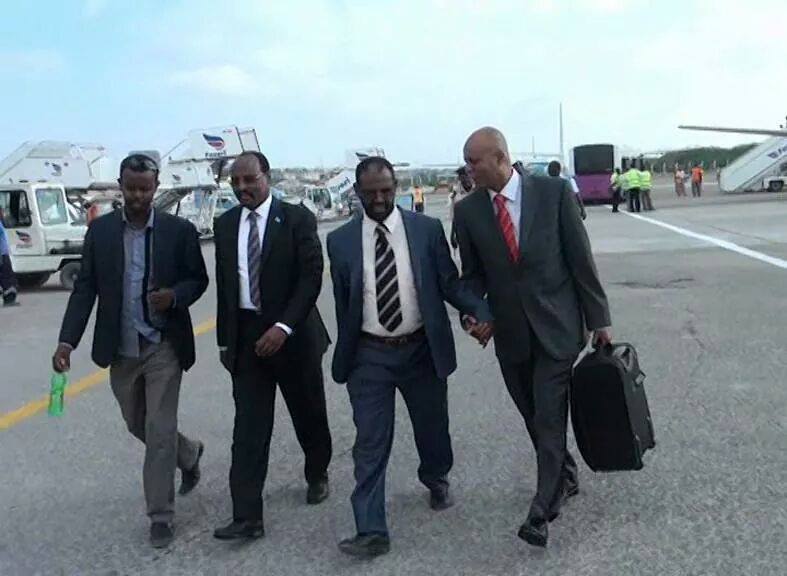 Mogadishu (HAN) November 17, 2014 – Public diplomacy and Regional parliamentarian Security and safety news. Abdullahi Godah Barre, the Minister of Interior of ‪‎Somalia‬ spoke to VOA and said that 16 ministers wrote a letter to the PM asking him to resign as he lost the confidence of the President and the parliament. He said 140 MPs signed the motion. The letter also says if the PM doesn’t resign they will resign. What do you think will happen next?

The Federal Republic of Somalia

Whereas, we, the undersigned Somali parliamentarians, who have previously submitted to your office a no-confidence motion against Prime Minister Abdiwali Sheikh Ahmed and his government in fulfillment of our responsibilities and in conformity of Article 69 (e) of the Provisional Constitution of the Federal Government of Somalia and Article 75 (1) of the Rules of Procedure of the Federal Parliament of Somalia, which stipulates that parliamentarians have the lawful authority to table a motion of no-confidence against a sitting Prime Minister and his government;

1.A minority of parliamentarians have prevented the House members from signing and registering the Quorum register in order to stop the orderly sitting of the House, practically destroying and shredding the House List of attendance three times.

2.The said minority parliamentarians engaged in chaos, staged loud noises to disrupt the House, violence, and many acts of indiscipline that are unbecoming of a member of parliament, which behavior threatened the personal security of the members of the House and dismayed the Somali people.

3. The obstructionist parliamentarians, through their staged actions, blocked the Speaker from distributing the motion of no confidence when the Speaker’s Secretariat tried to distribute the agenda.

4. The obstructionist parliamentarians engaged in shouting matches, singing and also made loud sounds to disrupt the house with a view to discredit the reputation of parliament as a House of Rules and order.

Whereas, the minority obstructionist parliamentarians, have committed acts of misconduct and breaches which ought trigger sanctions and disciplinary measures as provided for in Article 70 (1)(3) of the Provisional Constitution of Somalia as well as Article 30(1)(2) of the Rules of Procedure of the Federal Parliament of Somalia, namely paragraphs 1 and 2, ( c), ( d), (e ), (g ), (I ), (j) (m), and Paragraph 3 of the same Article, particularly ( c) and ( d), all of which articles clearly specify and proscribe the proper etiquette and ethical proceedings of the House, such as:

1.That members of parliament have a right to express their opinions in a concise manner focusing on the agenda of the House.

2.That each and every member of parliament has a positive responsibility not to instigate a commotion in the House that may cause instability and tension in the country and within the Somali public, and also to respect the decorum and the civic honor of the parliament.
That members are prohibited to introduce discussion items that are not on the agenda of the House session, unless they obtain a prior authorization from the Speaker of the House.

3.That members are prohibited to engage in acts of indiscipline inside the House and also its surroundings.

4.That members are prohibited to carry and bring placards and written slogans inside the House, and they are also prohibited from making loud noises designed to obstruct the House proceedings.

5.Members of parliament are required to raise their hands when they want to take the floor to speak, without resorting to noise, abandoning their seats or making any other unauthorized actions.

1.Having considered the violations and breaches of the Rules of Procedure of the House, and the continuing indulgence in acts of indiscipline by an obstructionist minority of parliamentarians determined to hijack and impair the constitutional role of the parliament;

2.Having become convinced of the inevitability of carrying out our constitutional obligations and exercising our rights towards the motion of no confidence tabled against the Prime Minister and his government.

3.Taking note of the fact that the leadership of the parliament has failed to use its authority under the Rules of Procedure to properly manage the House, suggest the following:

Mr. Speaker, in light of the above-mentioned facts, it has become imperative that we call upon you to meet your constitutional obligations and fulfill your responsibilities conferred upon you by the Rules of Procedure of the Federal Parliament of Somalia; that you further diligently observe the proper and orderly proceedings of the House, to ensure a proper management and smooth functioning of the House.

We further call upon you and urge you in earnest to re-open the House within 24 hours and officially introduce the motion of no confidence submitted against Prime Minister Abdiwali Sheikh Ahmed and his government, which motion carries Reference Number 422, dated November 6, 2014 and included in the agenda docket of the Parliament on November 11 and 15, 2014.

Mr. Speaker, we remind you that all necessary legislative agenda and work plan integral to the realization of Vision 2016, independent and free election and constitutional development are dependent on an un-interrupted proper functioning of parliament, failure of which you will assume full responsibility for any delay that befalls on these tasks.

Honorable Speaker, we trust that you will fully consider our propositions mentioned above as we constitute the majority voice of the parliament and hope that we will not be forced to take other drastic measures that would permit us to salvage parliament as the only foundational institution of our country, in a manner that is in line with the Provisional Constitution of Somalia.

Signed by the Majority of Parliamentarians.

HE. Abdi  Hosh, Member of the Somali Parliament
N.B: hard copies of signed names and signatures available upon request as per security reasons.