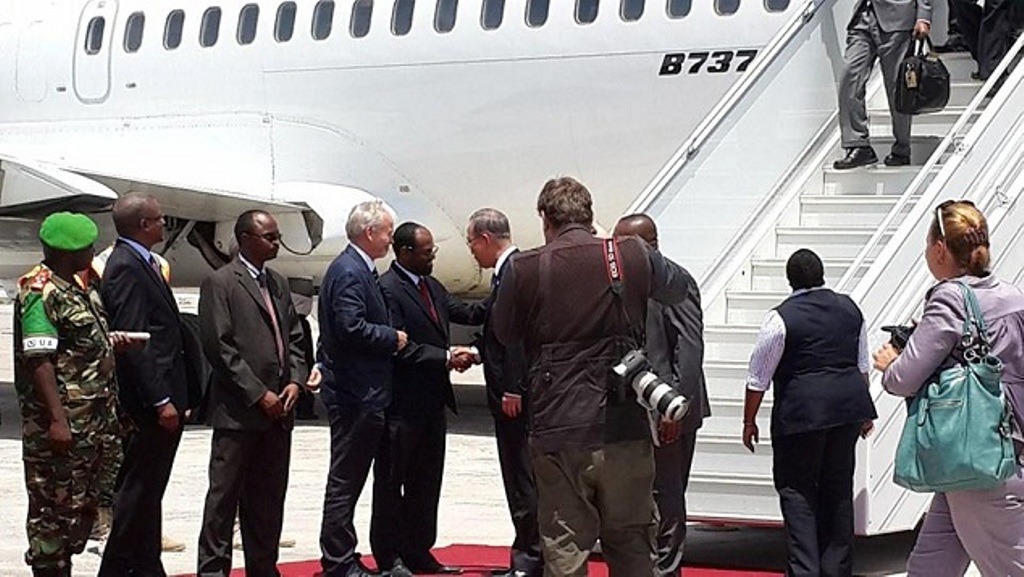 Mogadishu (HAN) October 29, 2014. Public diplomacy and Regional Security Industry Tracker news. United Nations chief Ban Ki-moon, joined by leaders of the World Bank, Islamic Development Bank and other institutions, is calling for action to prevent another famine in Somalia, where he says more than three million people are in need of humanitarian aid.

Ban spoke Wednesday during a brief stop in the capital, Mogadishu, part of a multi-nation tour to pledge support for Somalia’s transition and strengthen security across the wider Horn of Africa region.

“I urge Somalia’s leaders to remain united and focus on the country”s peacebuilding and state building priorities. Somalia needs continuity and stability at this critical time,”

The U.N. secretary-general said Somalia was making progress toward political stability, but he said he was “very concerned” about the humanitarian situation in the country and called for donors to increase contributions.

The U.N., World Bank and other institutions this week pledged $8 billion to help develop the countries of the Horn.

Somalia is trying to emerge from more than two decades of violence and chaos. The country suffered a famine that killed an estimated 260,000 people in 2011, at the height of the government’s conflict with militant group al-Shabab.

Ban said Wednesday that “al-Shabab’s power is declining but it is not gone.” He said it was critical that government forces and African Union troops secured roads to newly-liberated areas to allow commercial and humanitarian access.

“First of all, we know the political, governance, security and development challenges are immense — and we are committed to helping the country address them,” Ban announced to Somali political leaders as well as U.N. and African Union officials at a base in Mogadishu amid heightened security.

Jim Yong Kim, president of the World Bank, said the nation should seize the moment, calling on all Somalis to embrace peace that will lead to development.

“Our joint visit to Somalia marks an important moment for Somalia, an opportunity for all Somalia and the wider Horn of Africa,” he said. “The opportunity is now here for Somalis to create an environment of peace for themselves and a region that has been marred by decades of conflict.”

While in Somalia, Ban and the delegation met with Somalia’s President Hassan Sheikh Mohamud, who recently reshuffled portions of his cabinet, and other Somali political leaders.

The secretary-general has visited Ethiopia and Djibouti, and traveled to Kenya after his stop in Somalia.