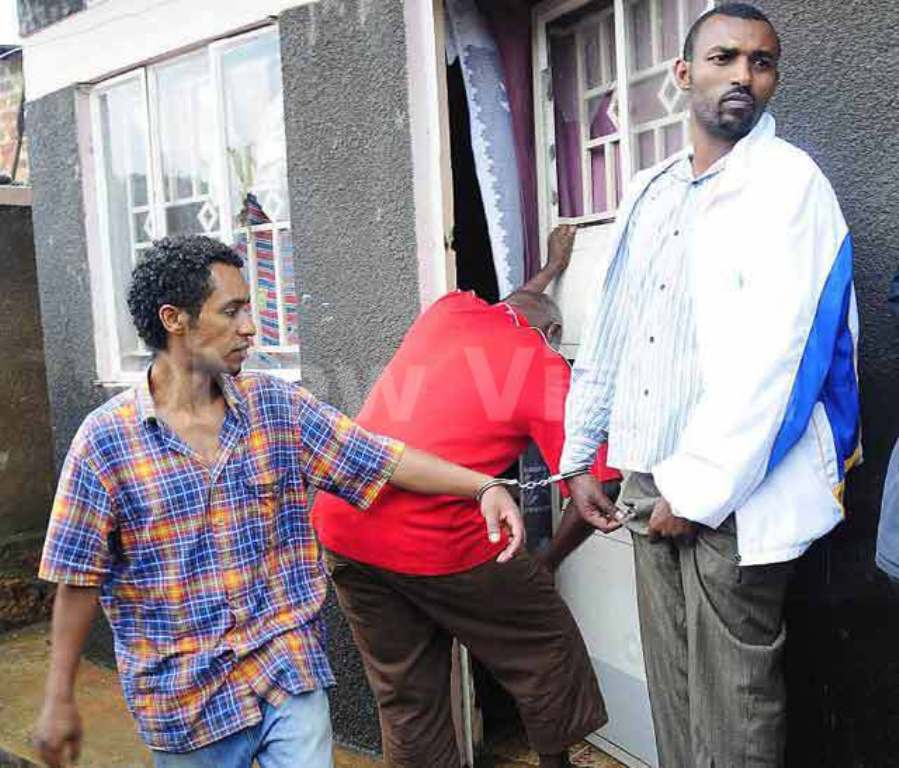 Kampala (AN) September 18, 2014 – Expert Analysis, Your Power & Regional Influence Magazine, by Edris Kiggundu. The Observer.  Al-Shabaab elite suicide  key suspected  terrorists slipped out of the police’s orbit during the weekend crackdown on a cell in Kampala. The Observer writer Edris  has learnt. Although 25  elite Al-Shabaab suspects had been arrested by press time, a well-placed security source told The Observer on Monday that Muhammed Abed Nassir and a one Fazil had escaped.

According to Edris: Our source described the two as Kenyans of Somali origin. They are said to have undergone training at al-Shabab bases in Somalia early this year, before settling in the Kenyan coastal town of Mombasa.

“We got information that they had sneaked into Uganda towards the end of August. We think they were the key planners because they are very knowledgeable about making bombs and planning attacks,” the source said.

The discovery that Abed Nassir and Fazil slipped through the orbit of security was made after interrogation of suspects arrested at the weekend, the source said. The Observer has learnt that there is a strong likelihood that the duo is still in the country. The source said security has been enhanced at the border points. Of the two fugitives, Abed Nassir is the better known. Well-trained in building explosives, he is on the wanted list of Kenya and other countries.

According to the source, the botched planned attacks targeted malls frequented by foreigners. The would-be day of attack remains unknown. At this stage in the investigations, the source said, it is not clear whether the terrorists planned to hurl hand grenades into buildings, use suicide bombers or simply shoot into crowds of people.

However, some materials, including bolts usually used as components in bombs were reportedly recovered in Kisenyi, a down-town Kampala slum area, during the police crackdown. We have also established that police and intelligence were alerted to a possible terrorist attack by informants within the Somali community in Uganda.

So far the police have declined to reveal the identities of the 25 suspects in custody. The suspects, Ugandans and Somalis, were picked from Kisenyi, Lungujja, Kasubi and Bakuli, all city suburbs. All the suspects, the source said, did not have identification papers, though this does not necessarily tie them to al-Shabab.

Indeed al Shabab issued a statement on Monday, quoted by Reuters news agency, denying that an attack by their group had been foiled. The suspects are likely to be produced in court by Friday, our source said. Fred Enanga, the police spokesman, told The Observer yesterday that much as he has no specific information about Abed Nassir and Fazil, there is a possibility some al-Shabab suspects were not apprehended during the operation.

“As you know these terror cells usually have more than 20 people and they don’t live in one place; so, on that basis many of them could still be out there,” Enanga said.

Asked the targets of the planned terror attack, he said he could not reveal for fear of causing panic within the public.

“The public usually has a different interpretation of such information. But what we do is to engage the management of those places regularly about how to keep their places secure,” Enanga said.

Gen Katumba Wamala, the chief of defence forces, told The Observer in an interview last week that there were plans by the new leader of al-Shabab, Sheikh Ahmad Umar, to attack Ugandans in Mogadishu and Kampala (see, New al-Shabab boss plans to hit Uganda – Gen Katumba).

The warning came a week after al-Shabab leader Ahmed Abdi Godane, 37, was killed in a US air strike in Somalia. Ugandan forces operating in Somalia are reported to have aided the US operation.

The army has warned that the new leader of the Islamist militant group al-Shabab plans to hit Ugandans.

The warning comes a week after al-Shabab leader Ahmed Abdi Godane was killed in a US air strike in Somalia. He was replaced by Sheikh Ahmad Umar. Godane, 37, who had a passion for poetry, seized world attention a year ago with the Westgate mall attack in Nairobi, which left at least 67 dead. He warned Kenya that it would suffer further atrocities unless it withdrew its troops from the AU force in Somalia.

Sheikh Umar alias Abu Ubaidah, who was announced the new leader on September 6, is now intent on retaliatory attacks on Americans, Ugandans and all countries with troops in Somalia.

In an interview yesterday, Gen Katumba Wamala, the chief of defence forces, said: “The terrorist attack [threats] on us both in Mogadishu and at home are real because al-Shabab knows that we are the leading nation that recently captured their operational areas, which include Kartunwaary, Marinrangwaayi, Katoniwaari, Baromali and Beradi Amin whose last point is about 120km.”

Katumba added that the capture of these bases by Amisom, of which Uganda has the largest contingent (about 6,000 soldiers), aided the US in identifying Godane’s hideout. Katumba, who recently toured the newly-captured areas and assessed the welfare of soldiers, said they would now go for Barawe, an al-Shabab economic hub with a port.

Katumba said although Amison had recorded successes in Somalia, the new al-Shabab leader seemed more determined to retaliate. He pointed out that on September 8, al-Shabab attacked an AU vehicle and killed 12 people, including two Somali policemen, and injured 27 others. Although Amisom is yet to assess the strength of Umar, it is believed that this recent attack could have been planned in advance by the late Godane.

“Once an organisation loses a strong leader, and chief planner, there is shock and some disorganisation. Still we need to be on the look-out because as we squeeze al-Shabab in Somalia, they can relocate and they can’t be defeated without putting up a fight or revenge of any sort,” Katumba said.

On the welfare of UPDF soldiers in Somalia, Katumba described their morale as very high, although some of their allowances remained unpaid by AU.