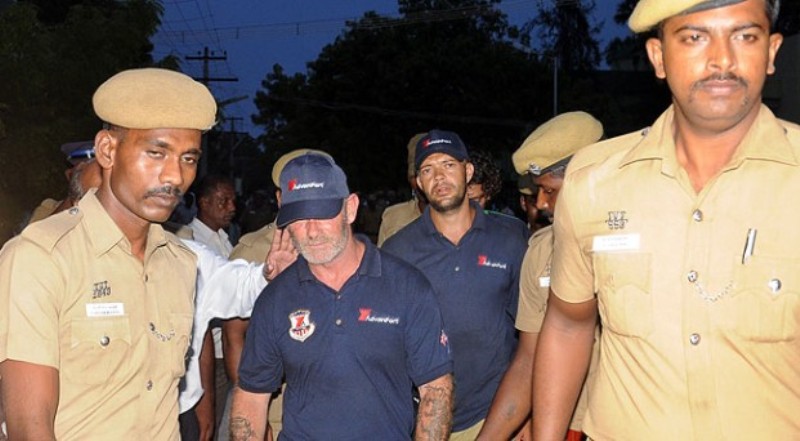 Djibouti  (HAN) August 19, 2014 – Regional security and marine safety news. The Indian navy is not yet  convinced the story of US security firm called AdvanFort, who use to station in Somali waters to protect Ships.

“The simple explanation that the vessel was providing security to other merchant vessels from pirates cannot be taken at face value,” Vice Admiral (retd.) K N Sushil, former Commander-in-Chief of the Southern Naval Command said in a media interview.

The three navy seals style men, who formed part of the crew of a US-owned anti-pirate vessel that strayed into Indian waters, were arrested on weapons charges last year, according to Geeska Afrika Online security reporter.

Three former servicemen (Pictures) from East Yorkshire who were jailed in India have been banned from leaving the country – despite charges against them being dropped.

India is increasingly sensitive to violations of its maritime boundaries and directly supports the multi-national campaign to combat Somali pirates targeting ships in the Indian Ocean with its own navy. But it has been controversial too given the embroilment of India and Italy in the diplomatic row over the deaths of the two fishermen

“Who authorized them? What are the conditionalities involved? Who pays them? What is the right of passage for the vessel to enter Indian territorial waters? Who sanctioned them the right to operate with armed guards? If no countries have issued such a sanction, they themselves should be treated as pirates,” Sushil said.

The Seaman Guard Ohio, owned by a US security firm called AdvanFort, was stopped by the Indian Coast Guard off southern Tamil Nadu last week, which found it bristling with weapons and an international cast of elite former military personnel. Although though the ship’s real intent in wading into Indian waters is ambiguous and under investigation by the authorities, AdvanFort’s spokesman in Virginia, told Asia Sentinel that the vessel was “forced into the 12-mile zone by a typhoon.”

Photo: Indian policemen escort crew members of a U.S.-owned ship MV Seaman Guard Ohio outside a court in Tuticorin, in the southern Indian